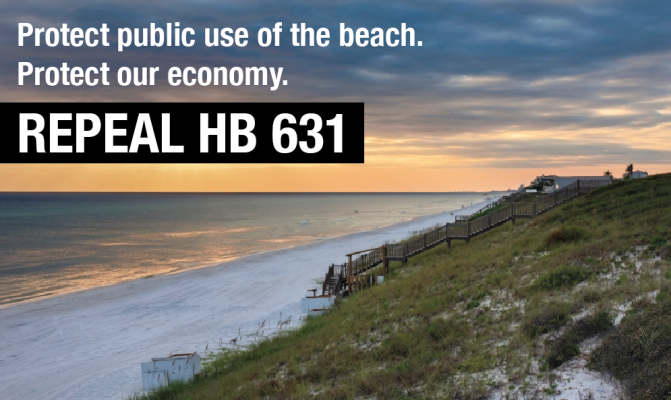 The people of Florida own the beach front property up to the mean high water mark along all of our coasts.

Beachfront homeowners or the government may own the dry sand beach area down to the mean high water mark.

“Customary Use” refers to the right of the public at large to possess and use certain dry sand areas for recreational purposes because of long standing use by the public over many years. This right has been recognized by common law for centuries.

The Walton County Commission passed an ordinance protecting the long standing “Customary Use” of the public on all of the beaches of Walton County regardless of public or private ownership.

House Bill 631, passed by the Florida Legislature on March 8, 2018, prohibits counties like Walton County from adopting or enforcing an ordinance or rule establishing “Customary Use” of privately owned dry sand areas of the beach.

Gov. Scott approved House Bill 631 on March 23, 2018, and it became law on July 1, 2018. The bill Gov. Scott signed repealed Walton County’s “Customary Use” Ordinance which guaranteed the public’s right to use the beaches.

Since July 7, the Walton County Sheriff’s Office has begun ordering people on privately owned dry sand areas of the beach to leave the beach or be arrested for trespass.

We, the undersigned call on our state delegation to introduce legislation repealing House Bill 631, so that Walton County can protect public use of the beach and protect our economy.