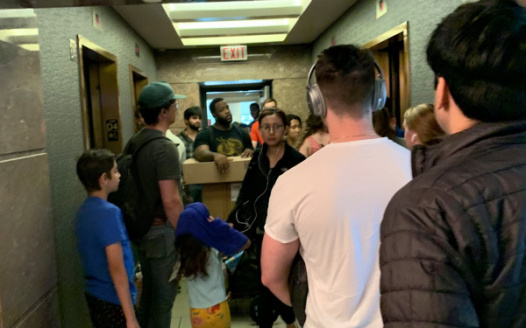 As residents, we are unhappy with the inefficient and unsafe condition of our elevator system, and we feel that our concerns have been left unanswered for long enough. This is a hot button issue for many of us: I created a Facebook group as a means of a public forum for people to express their frustration about this, and that group has grown exponentially. Something needs to change.

It is not acceptable for our elevator system to fail so badly and so often that being left waiting for an elevator for 30 minutes is made to seem 'normal' as a daily issue for many of us; particularly during rush hour times. A growing number of residents I have spoken to have also commented that being stuck in the elevator for a duration of 15 to 30 minutes is also quite common. This happened just two weeks ago to my roommate, and I've noticed on at least two other occasions within the past month that an elevator has left people trapped within it.

Elevators are often broken and out of commission for weeks without resolution: I particularly cite elevator D4, which broke again after just hours of resuming service... who knows when it will be fixed again, and for how long it will last for next time. It is dangerous that the elevator will often close on residents, especially when you consider that we must cram as many people into the elevators as possible during the evening. This poses a constant threat of injury.

The elevator management system is clearly not working, either. Often we will press our floor number and be told to wait for an elevator that is up on the 40th floor or higher, whilst another elevator is literally on the same level as us, and goes up the building without anyone in it. It makes no sense.

I know I am not alone in having had to climb over 400 steps to access my apartment several times in my tenancy, sometimes with heavy grocery bags. Several of my guests were forced to walk down my tower from my high level apartment, since all four elevators broke at the same time. This is a serious safety hazard.

We ask that you offer us a real solution to these grievances, such as a new or improved elevator system within the towers, aware that some residents have successfully negotiated a reduction in their rent as a direct result of this issue. Clearly, you see that there is a problem when you make such concessions. This isn't just one or two of us coming in isolation now: this is all of us, from all four towers. Fix it.

The residents of Presidential Towers.