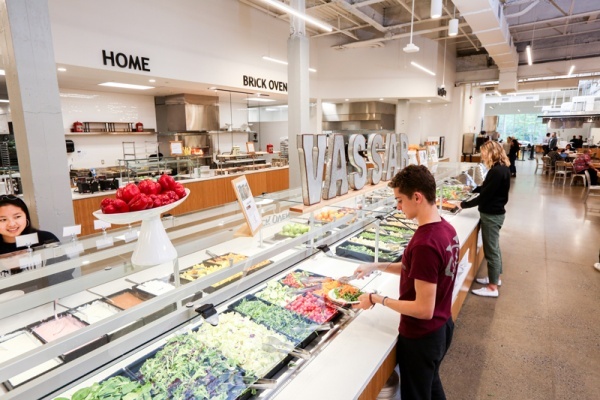 Over the summer, Gordon Commons remains open feeding the various summer programs that occupy this campus over the summer. This employs a portion of year round dining service employees who wish to remain employed over the summer. These jobs, although still offered this summer, have also faced cutbacks. Job positions have been fragmented into smaller tasks meaning if you want to work all summer you would have to apply for multiple job positions.

The remaining workers who wish to stay are able to apply for grounds jobs to maintain a steady income. Starting 4-5 years ago, the Pilot Program, a program created to ensure summer employment would be provided to those who wished to continue working, was written into the Dining service employees contract. Workers under the pilot program would clean dorms and facilities and help out with other various necessary tasks. Since its creation, administration have cut pilot program jobs every year and this year it has been cut altogether despite it being a stipulation in the contract.

One of the reasons stated for cutting back jobs is the renovation of three dorms over the summer. Since these dorms will be out of use, they will not require cleaning. However, last year two dorms were under renovation and 12 cleaning jobs were still offered to dining service employees.

Without these jobs employees will lose an unexpected three months worth of income. Some workers have started the application for food stamps in anticipation. Many are worried about making rent and now begin the difficult task of trying to secure a temporary job opportunity only 3 months in advance.

What's worse is this information has only been made public because a union representative was invited to a meeting with administrators by another union member. It was here that this representative found out that all summer working opportunities outside of the work provided in the Gordon Commons would be slashed. Had this meeting not occurred or had this member not been present, it is probable that this information would not have been relayed to the workers until April when job positions were listed. This is unacceptable, we cannot be informing our workers with only a months advance notice that the employment opportunities which for the past couple years has been an expectation for many no longer exist. How are workers supposed to find alternative temporary employment in such a short period of time? This was a decision made with workers fundamental well being completely disregarded.

THIS SUMMER: NO JOBS EXCEPT FOR 8 CLEANING JOBS DURING REUNION (1 week gig)

THIS IS UNACCEPTABLE. OUR WORKERS CANNOT BE WORRIED ABOUT AFFORDING FOOD OVER THE SUMMER.