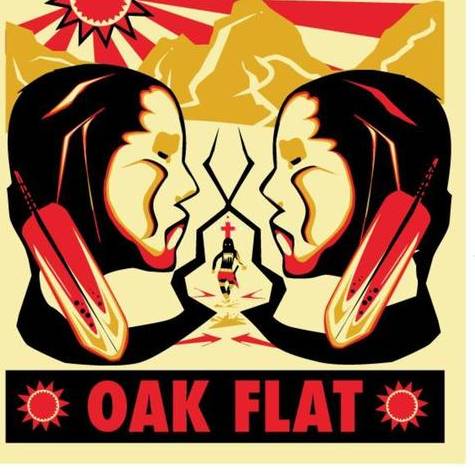 Recently Congress placed an "eleventh hour" provision into 2015 National Defense Authorization Act (NDAA) bill, that will hand off 2,400 acres of land sacred to the San Carlos Apache to a foreign mining concern. The ancestral and ceremonial lands, a part of the Tonto National Forest, includes the site, Apache Leap, where Apache warriors jumped to their deaths rather than be captured .

“Since time immemorial people have gone there. That’s part of our ancestral homeland. We’ve had dancers in that area forever – sunrise dancers – and coming-of-age ceremonies for our young girls that become women. They’ll seal that off. They’ll seal us off from the acorn grounds, and the medicinal plants in the area, and our prayer areas,”

The measure which has failed several times in the past but was inserted into the must-pass defense appropriation bill thanks to the efforts of Arizona Republican Senator, John McCain. On passage of the NDAA, the land will be given over to Resolution Copper, a subsidiary of the Rio Tinto, a massive mining concern based in London, England and Melbourne, Australia that has been salivating over the prospect of mining the area for years.

A key promise of America is respect for other cultures and people. We the people, the signers of this petition respectfully call upon you to put down your veto pen and pick up your Executive Order pen -and protect sacred Native American land from destruction and plunder by foreign or domestic companies seeking profit without regard to people or planet.