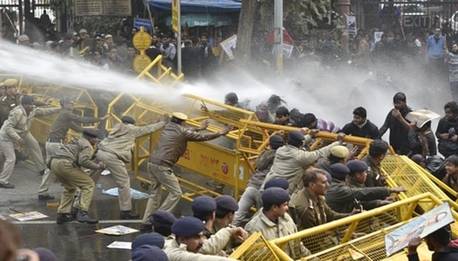 Protecting the rights of minorities and dissident groups in India.

We are writing to you as an international community of social psychologists who are growing increasingly concerned about the rise of intolerance towards minorities in India. As scientists who study how people's thoughts, feelings, and behaviors are shaped by others, we are aware that such intolerance can have a long-lasting impact on India’s social fabric. India is one of the most diverse countries in the world, home to people of many ethnic, religious, caste, tribal groups and philosophic traditions. Rooted in this diversity are the fundamental rights enumerated in India’s Constitution, including the right to equality (prohibiting discrimination on grounds of religion, race, caste, gender or place of birth), freedom of religion, cultural and educational rights (including the right of any section of citizens to conserve their culture, language or script) as well as freedom of speech, assembly, association, movement and residence. Although Indians have struggled to realize these freedoms since the founding of the nation, a number of recent high-profile events have called into question the extent to which Indians can live lives unencumbered by intolerance.

In July 2014, over 50 villages in Bastar district banned all non-Hindu religious worship and speeches. In September 2015, a Hindu mob lynched a Muslim family in the town of Dadri, based on rumors that they had killed a cow. Last year also witnessed multiple attempts to further ‘ghar wapsi’ or ‘home-coming’, which involved the forcible conversion of religious minorities ‘back’ into the Hindu fold. In addition to the violence faced by religious minorities, atheist and secular thinkers who espouse scientific understanding have also been victims of similar attacks. For example, M. M Kalburgi, a writer and activist who promoted rational and scientific thinking, was gunned down in his home in August 2015.

Similarly, according to the National Crime Record Bureau, violence against Dalits has increased from 32, 712 cases in 2010 to 47, 064 crimes in 2014. Against this backdrop of growing caste-based violence was the suicide of Rohith Vemula, a Dalit scholar-activist at Hyderabad Central University, in January 2016. Rohith was one among five Dalit students who faced severe punishments from the university owing to their political leanings. In the wake of this event, over 70 students were arrested at this University for protesting against caste-based discrimination and demanding the Vice Chancellor’s resignation.

As social psychologists, we know that attacks against religious, caste and atheist-rationalist minorities can have serious implications for communal harmony in India. When someone is targeted and victimized because of their group membership—be it through physical attacks or discrimination—there are detrimental psychological consequences not only for them but also for their entire community, and the social fabric of Indian society as a whole.

Fortunately, policymakers can address such experiences of identity-based victimization by working to end cycles of violence and fostering peaceful relations between different communities. Furthermore, policymakers can strengthen democracy and build public trust toward government by eradicating punitive measures against citizens who exercise their right to political dissent and protest against such violence. Insights from the field of social psychology suggest that policy makers might engender this kind of change by:

To sum up, we urge you to take a firm stance to protect the rights of minority and dissident groups, as well as to promote policies that are consistent with scientific thinking. While far from comprehensive, we believe the above-mentioned recommendations can lay a solid foundation for building a more diverse, democratic, and peaceful India!