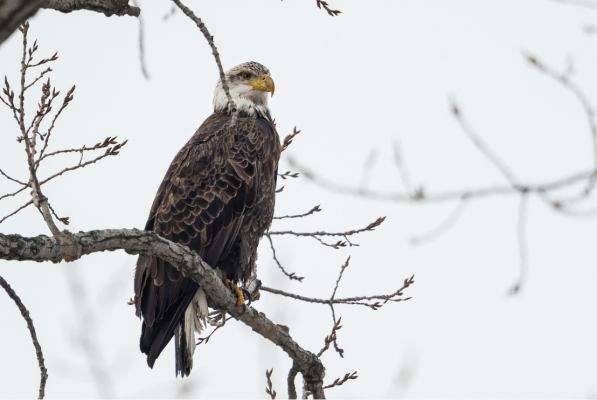 Last year the County agreed with Onondaga Audubon and the many of you that signed our last petition to place the trail next to the RR tracks, as far as possible from the roosting birds. However, the County recently rescinded this idea and plans instead to place a trail closer to the shore, directly beneath the trees these majestic birds use and on polluted ground. While the County states that the trail will be closed Dec. 15-Mar. 15, human traffic during the other 9 months will adversely affect the eagles’ presence in this area. Eagles can acclimatize to trains and cars, but not to the human form, which they view as a predator. There is ample scientific evidence that concludes that human foot traffic is the most disturbing to Bald Eagles when compared to other sources of human disturbance (Grub and King 1991, Stalmaster and Kaiser 1998, and Hamann 1999).

Since the County refuses to place the trail in a location that is a safe distance from the Bald Eagles and because there are other alternatives to looping the lake that do not go over Murphy’s Island, we advocate that the County instead make Murphy’s Island an Eagle Sanctuary. Murphy’s Island is situated directly next to the City’s planned “Lake Lounge” viewing area at the end of the Creekwalk Trail allowing the County to protect a precious resource while making it accessible for viewing at a distance by the public without the fear of disturbing the birds. Additionally, preserving this area will provide us the opportunity to educate our children about the value of Onondaga Lake as an Audubon Important Bird Area for thousands of wintering waterfowl and year-round Bald Eagles.

Please sign this petition if you have concern for the eagles and support the creation of an Eagle Sanctuary rather than a trail that will disturb our precious birds from the area. Signatures and comments will be presented to the Onondaga County Legislator, Onondaga County Executive Ryan McMahon, Syracuse Mayor Ben Walsh, and the NYSDEC.