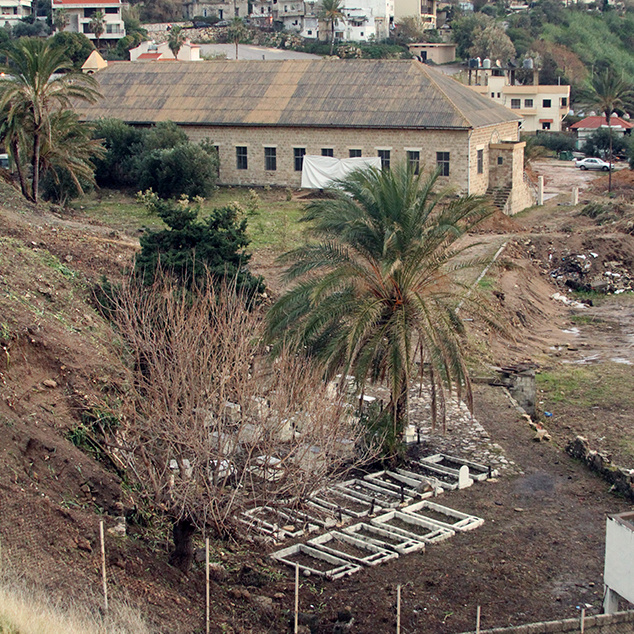 On Feb 21st 2015, The Armenian Catholicosate of the Greater House of Cilicia, keeper of the historic Bird’s Nest Orphanage, declared that it will be renting out the southern section of the plot to developers, who will transform the area to a beach resort.

The statement specifies that the old Saint Kayaneh Chapel will be included in the handover. It also included an even more disturbing detail. Thirty-three bodies which have been resting for over eighty years in the patrimonial cemetery of genocide survivors will be dug up, moved to the northern section of the plot, and put into a collective tomb.

In 2015, Armenians throughout the world are commemorating the hundred year anniversary of the Genocide that saw them tortured, massacred, thrown into mass graves, and dispersed to the four corners of the world, including of course to Lebanon.

On the 100th year commemoration of the Genocide, we take a stance against the erasure of more Armenian history and heritage. We refuse the desecration of more cemeteries and the displacement of more bodies. We are all the more resistant to this given the fact that these actions are being undertaken by the hands of our very own representatives.

With this petition, we as Armenians, as Lebanese and as Citizens, ask that all concerned authorities exercise their duties and responsibilities towards us and towards history, our patrimony and human dignity. With this petition:

1- We demand from the Catholicosate to perform its duty as the defender of the diaspora Armenians, their rights, their memory and their patrimony, to stop the destruction of the cemetery for ethical and historical reasons, and to preserve the Saint Kayaneh Chapel which is an important part of Byblos’s heritage.

2- We demand from The Directorate General of Antiquities to exercise its duties by preserving the cemetery area, which is classified as an archeological excavation field (G1), and is protected from construction given its proximity to the historic ruins. (G1 is defined by the Higher Council of Urban Planning as: Public Domain, excavation field, subject to Directorate General of Antiquities control and administration.)

3- We demand from The Municipality of Byblos and the Ministry of Culture to exercise their respective duties and powers in declaring the Bird’s Nest Cemetery a site of patrimonial importance, as well as a memorial site for Lebanon’s historic role as a place of refuge for victims of humanitarian crises. It is in the power of the DGA to withhold permission to destroy the cemetery.

Rather than privatise more of our beaches and disturb the slumber of our dead, we demand that the cemetery be given its due prominence; that it be turned into a public memorial site, accessible for people from all walks of life.

To join the campaign email us at: thebirdsnestcollective@gmail.com

About the Bird’s Nest and Saint Kayaneh Chapel

In the plot of land adjacent to Byblos’ ancient ruins lies the Bird’s Nest: an orphanage built to house Armenian refugees who had escaped the 1915 Genocide. The Bird’s Nest has served generations of Armenian children who have also attended the school.

The southern part of the plot includes Saint Kayaneh Chapel, built by the orphans themselves in 1921. That chapel has been the only place of worship for the Armenians of Byblos.

On the edge closest to the ruins, underneath a palm tree by the sea, lies a small cemetery which has been the final resting place for thirty-three orphans and other genocide survivors since as early as 1924.

(The petition is free of charge, donation proceedings go to iPetitions and not the campaign)