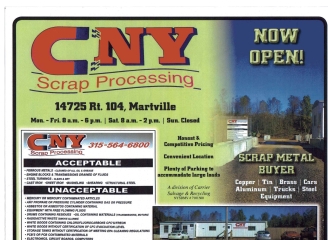 Northern Cayuga and Wayne Counties, situated on the southern shore of Lake Ontario with all of its beautiful bays, contain some of the most pristine natural areas in New York State. Home to a large variety of wildlife, forests, farms and wetlands, it is an area that must be protected. Unfortunately in 2011, the Town of Sterling permitted an industrial scrap processing facility, known as CNY Scrap, to locate and begin operating within its boundaries. CNY Scrap was issued the first ever scrap processing permit in the Town of Sterling, which was in violation of existing Town of Sterling zoning laws, Town of Sterling junkyard code, and New York State junkyard law. The Town of Sterling junkyard code explicitly prohibits the processing of scrap metal. Consisting of three parcels of land, all of which are zoned residential/agricultural, CNY Scrap is located at 14725 State Route 104, Martville, NY. Portions of these parcels are in what is referred to as Natural Resource Protection Overlays in Article XVIII of the Town of Sterling Land Use Regulations. These districts provide special controls over land development. They are areas where standard zoning controls are not adequate to protect vital environmental features and resources. This facility is not only located on property that contains state and federally protected wetlands, but is additionally situated above one of the largest major aquifers in northern Cayuga County. The majority of the homes and people in this area get their drinking water from wells and the local aquifers. Blind Sodus Creek passes this facility just a short 160 feet to the west, flowing north and emptying into Blind Sodus Bay and then Lake Ontario. Another creek, a very short distance to the east, drains south through Victory township, eventually feeding Sterling Creek, and again Lake Ontario. Between these two watersheds lies Fair Haven, Little Sodus and Blind Sodus bays, and quite possibly any escaping toxins. CNY Scrap has been cited repeatedly for violations of Environmental Conservation Law. In addition to past citations, they have received the following citations from the DEC in 2014: - Failure to contain and label dangerous fluids properly (5/22/2014) - Waste tires in excess of 1,000 (5/22/2014) and (10/1/2014) - Failure to submit records of cars/fluids/batteries etc... that come in and go out (5/22/2014) and (10/1/2014) - Failure to prepare and implement a contingency plan in the event of a spill, fluid release, fire, etc... (5/22/2014) - Failure to prevent fluids from entering ground or surface water (5/22/2014) - Stained soil not removed from the site and properly disposed of (10/1/2014) Even if CNY Scrap was in compliance with all local and state laws, which it is not, this type of industrial facility is not suitable for this residential and vulnerable natural area. We the undersigned, concerned citizens of, and visitors to, Northern Cayuga and Wayne counties call on the Town of Sterling Board to deny any and all extensions, or new permits, allowing the industrial scrap processing facility CNY Scrap to continue operating.