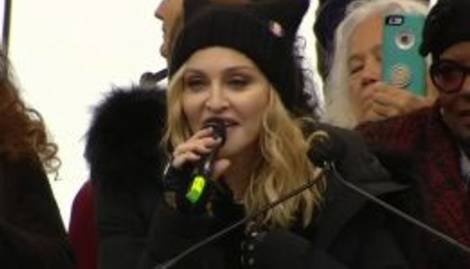 “Yes, I am outraged. Yes, I have thought an awful lot about blowing up the White House.”

. Are you "Outraged" about her statement?

. Do you consider here statement "Dangerous"?

. Do you want people to be responsible for their own words and actions?

. Is this what you want for generations to come?

If Madonna gets away

with such a threat, that in itself should be considered criminal.

. It is a criminal offence for anyone to threaten to...

. kill or cause bodily harm to any person

. kill, poison or injure any person's animal or bird.

The maximum penalty for threatening death or bodily harm is five years of imprisonment.

We should be stunned that such a statement would be made toward an American President, no matter who he or she is.

We should be stunned that such a statement would be made, period.