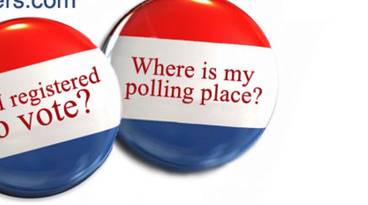 Promote the Vote! Be aware, and do your share.

My fellow classmates and I come today to present concerns regarding student involvement in voting on campus. We felt that ISU did not promote enough or effectively increase the number of students to vote on campus.

To ensure that that this was a genuine grievance, we had at least 28 student (at random) take a survey. This survey included questions that would lead us to the conclusion of whether others felt it was a general problem or not.

Key results are as followed:

Q3: How familiar are you about the candidates

policies? A combined 75% of students said they were "somewhat familiar" or have "not a clue."

Q5: Have you seen anything promoting voting on ISU's campus? 60.71% of people answered "No."

Q8: Do think ISU should put more effort to effectively

promote student involvement in the voting process? 71.43% of people answered "Yes."With that being said, we are aware that ISU makes attempts in promoting students to vote, but we as well as other students on campus (based off of results from survey), feel that ISU does not effectively promote voting as much as it needs to be.

We ask for adjustments and new additions to be made to the publicity of student voting on campus.