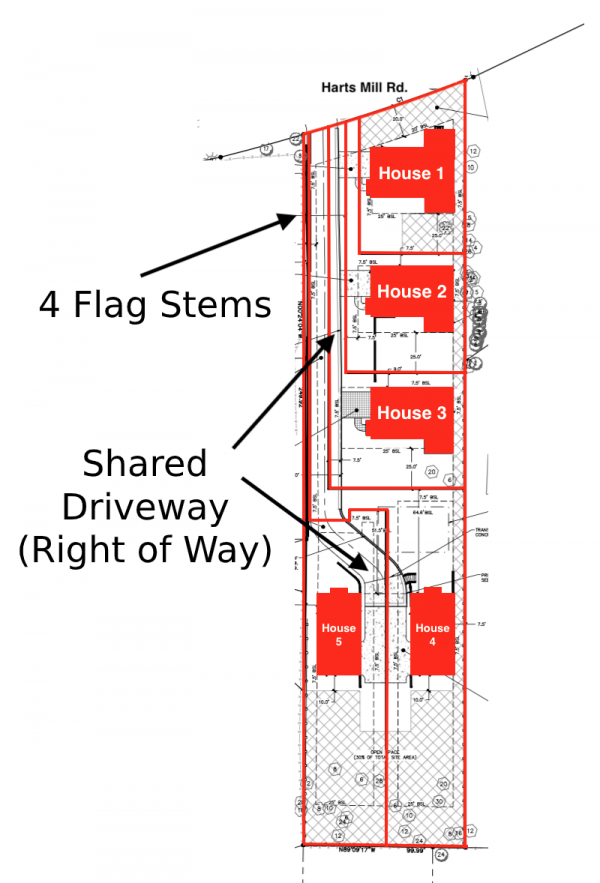 We, the residents of the Cities of Chamblee and Brookhaven, are adamently opposed to flag lot configurations in NR1 and NR2 zoned areas of Chamblee. Flag lots are expressly prohibited in DeKalb County, and we maintain that to uphold the intent of the codes for NR1 and NR2 zoned areas, they should also be banned in Chamblee. We feel that flag lot configurations are out of character in these areas of the City, and that all NR1 and NR2 residences should have full street frontage. We maintain that by codifying a simple statement of four words as Dekalb County has done: "Flag lots are prohibited." it would save citizens, developers and the Planning and Development Dept much time and effort by eliminating any confusion around the issue.

The Preserve at Harts Mill at 1723 Harts Mill Rd is a proposed five-house subdivision where only one of the five houses has actual street frontage. The remaining four houses are stacked behind each other, and utilize a shared driveway. This configuration is completely out of character with the homes in the surrounding areas of Brookhaven and Chamblee. Every home anywhere near this lot in both cities has full street frontage. We maintain that configurations such as this should be explicitly prohibited going forward.