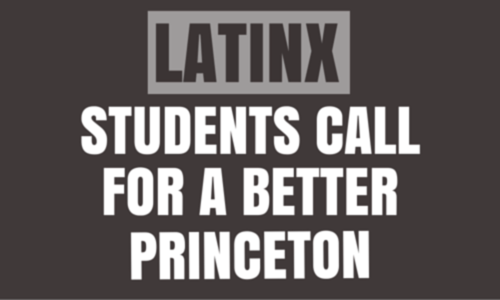 Members of the Princeton Latinx Community 0

586 people have signed this petition. Add your name now!

Members of the Princeton Latinx Community 0 Comments
586 people have signed. Add your voice!
59%

Members of the Princeton Latinx* community have assembled to include the needs of Latinx students in the recent conversations about diversity and inclusion at Princeton University.

A town hall meeting was held on November 18, 2015 open to the Latinx community to share experiences and ideas for change.

Full text document with citations can be found here: "Latinx Students Calling for a Better Princeton."

The document covers the following

*We have members that encourage us to think about the issues that face those of us with a multitude of minority identities, including being female and/or queer. Out of a desire to be both inclusive and supportive of all members of our community we have shifted to using the “X” to replace the gender binary “a” for women and “o” for men typically used in Spanish. This encourages all of us to think of gender as part of a continuum in which some of us do not fit the societally established normative understanding of gender. Changing one letter gives people the language necessary to verbalize their identities and advocate for their equal standing in society.