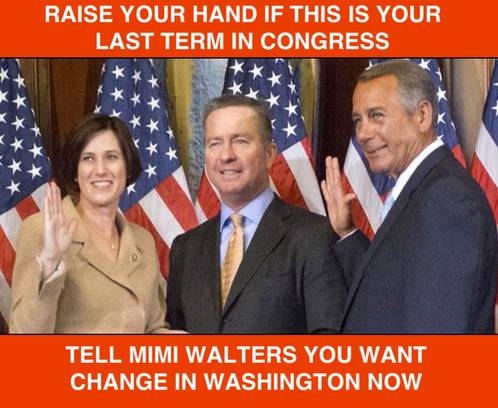 People of the 45th Congressional District.

Freshman House Representative Mimi Walters was chosen to Represent the 45th district in the last election cycle by us. We chose Mimi because her campaign message was largely about the fiscal and moral failures of Washington D.C.. She did a good job of making the case that the political ruling-class was out-of-touch with the values here in our district, by claiming the mantle champion for job creation, lower taxes, less intrusive government, and fiscal responsibility. As a result, she won that election, and we as conservatives felt we had sent a representative to Washington that would be articulate and make the case for our conservatives values.

Washington or District Influence That Is The Question.

Barely one year into her freshman term Mrs Walters, like many new representatives found herself a long way away from the district, and subjected to powerful influences from the Republican leadership. The promises of committee memberships, the glare of national media attention, and influential personalities appear to have had a greater impact on our representative than her own constituents. When her own constituents press her to defend her Yea votes on the super secret TPP, Planned Parenthood, Export-Import Bank, and Boehner's two year spending bill that includes unlimited debt increases, she replies to us with press releases and platitudes.

As constituents, we must ask ourselves if we have a representative that is listening to us, or to the Washington establishment. If we examine her votes we know the answer:

While Mimi does vote for some conservative legislation, time-and-time again when conservatives have the ability to make the case on critical issues, she votes to compromise, she caves to establishment pressure.

Unless Rep Walters understands clearly how disillusioned conservatives in the 45th are she will continue her go-along-to-get-along approach. Send Mimi a message by signing this petition. Let her know we expect better, or else.