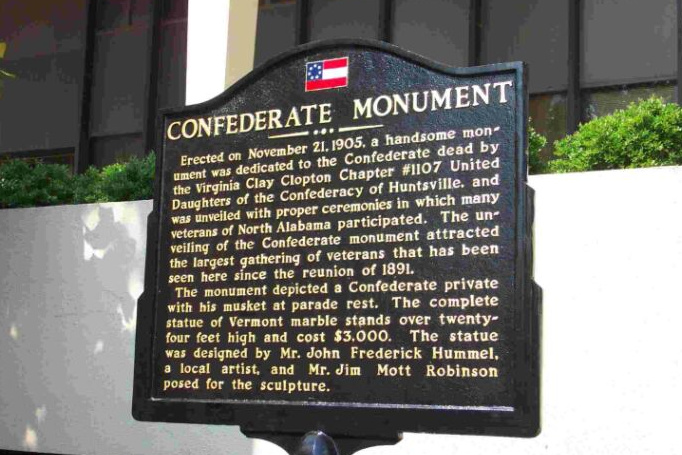 436 people have signed this petition. Add your name now!

The Confederate Veteran's Memorial should remain on the grounds of the Madison County Courthouse.

We agree that flying the Confederate Battle Flag from state-owned grounds is contrary to the principles of racial, social and national reconciliation for which our state's forefathers have pledged a forbearance of arms. The flag means many things to many people, but in the best of intentions, actively flying a Confederate flag from state-owned grounds represents an animate symbol of rebellion, at worst a symbol of hate and racism.

We, however, disagree with a full heart for peace and a full mindfulness for our past that the Confederate Veteran's Memorial should be removed from the grounds of the Madison County Courthouse. It is apparent, prima facie, that this memorial was dedicated to the veterans who fought during the War Between the States, and not in celebration of those hurtful institutions for which the rebellious Southern states had fought for. Its representation is inanimate, its erection predates the reactionary and deliberately provocative revival of Confederate symbols during the Civil Rights movement, and its overall demeanor is that of humbly honoring the fallen ancestors of our county in muted solemnitude.

The current hysteria of whitewashing and removing all physical traces of our state's past of this dramatic era in our national evolution constitutes an ill-informed movement of cultural and social cleansing, none of which furthers, in any known measure, our ongoing struggle for economic justice, racial understanding and social progress. On the contrary, it deepens the wounds of our past, and threatens to conjure new resentments for a future in which the personal political satisfactions of a few can trump, with little reason, the public satisfactions of the many.