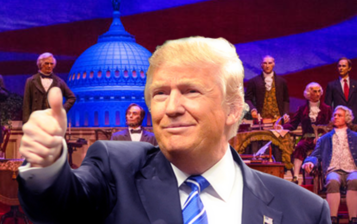 President Trump SHOULD Speak in Disney World's Hall of Presidents

The signers of this petition respectfully ask Disney to honor its tradition and update the Hall of Presidents with a speaking version of President Trump. To silence him in deference to a minority of angry leftist protestors would disgrace the legacy of freedom and democracy treasured by all of the presidents represented there.

Disney is visited by Republicans and Democrats alike, and treating every President the same will encourage unity and respect for the freedom of speech of all Americans.

In addition, Disney surely remembers that President Trump won the Florida GOP primary in a landslide and the state's votes in the general election as well-- as a practical matter, it can expect the same crowds who flooded his rallies to line up in order to enjoy the updated presentation featuring President Trump. It simply won't happen if his voters are insulted yet again with a patronizing implication that their views are somehow impermissible, even after his stunning victory.

Please respect your tradition, your loyal lifelong fans who voted for Trump, and American values by treating your version of this new President the same as Preaidents Obama was treated-- with a visage that speaks a unifying, universally appealing and patriotic message.