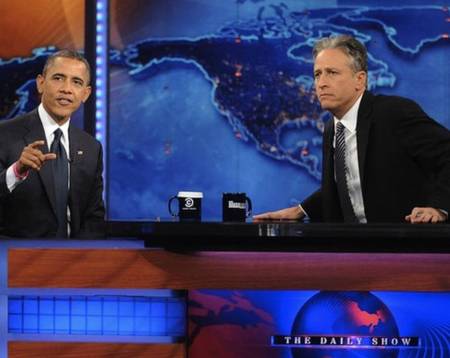 During his most recent interview with ‪Jon Stewart‬ at the Daily Show (July 2015), President Obama repeated his accusation that Iranians are both terrorist and anti-Semitic--and of all people John Stewart did not utter a word in protest. We the undersigned join Professor Hamid Dabashi in asking President Obama, to kindly refrain from repeatedly defaming Iran (an entire nation) and calling them anti-Semitic and terrorist--we believe it is unseemly--of all people of President Obama.

Dear ‪President Obama‬--yet again during your most recent interview with ‪Jon Stewart (July 2015) you repeated your accusation that Iranians are both terrorist and anti-Semitic--and of all people he (Jon Stewart) did not utter a word in protest.

At 6:19 minute you say, sir, "with respect to Iran, look, this is an adversary. They are anti-American, anti-Israel, anti-Semitic, they sponsor terrorist organization like Hezballah." You were even counting with your right hand finger when counting these Iranian vices.

Mr President: Iran is a country of almost 80 million human beings, perhaps the most pro-American country in the entire region, and one of the most ancient homes for millions of Jews from antiquity to the present --they are dancing with joy in the streets because of the nuclear accord--sporting T-shirts with I Love USA and American flag--

If in order to appease the Israeli lobby you wish to accuse the ruling state in Iran of any and all atrocities that is your choice--but the pronoun "they" in your sentence, sir, refers to all Iranians--

If indeed you think this entire nation is what you told Jon Stewart they are then why you send them those Nowruz messages every year and quote their beloved and globally celebrated poets like Sa'di, sir?

Are they decent people with a rich and tolerant culture or are they those things you counted with your right hand fingers?

We ask you please to refrain from repeatedly defaming Iran (an entire nation) and calling them anti-Semite and terrorist--it is unseemly--of all people from you Sir.