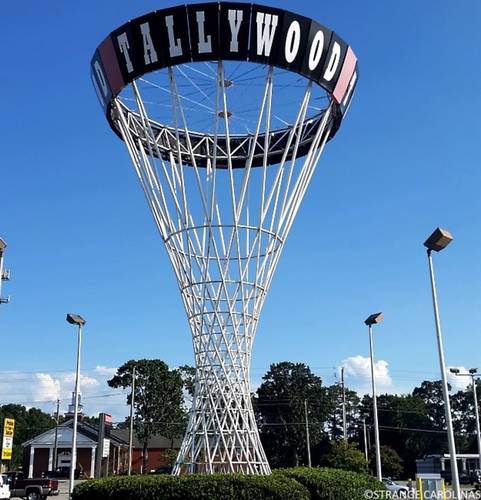 ***Thank you to everyone for your support!! Initial reports suggest the sign will be kept, I will keep everyone posted with any updates on the Preservation Fayetteville Facebook page and also the website at preservationfayetteville.org! Please keep circulating the petition. I have sent the petition link along with a letter of support to the owners of the complex.***

Many of you know that the Tallywood Shopping Center on Raeford Road is slated for demolition. A new shopping complex will be built in its place with a Publix Super Market as the anchor. The shopping center has gone through renovations and changes since its opening in the early 1960s, but one thing has always remained, the Tallywood Sign. In 2009 the City of Fayetteville commissioned a Modern Architecture Survey to identify significant places and landmarks from a time period that is often overlooked, or considered too recent to be considered historic. The shopping center complex had undergone too many renovations and changes to its original design over the years to be classified as a potential historic property, but the Tallywood Sign in all of its modern architectural glory still stood. "The structure of the sign is reminiscent of the base of Isamu Noguchi’s cyclone table, manufactured by Knoll in the mid- 1950s. Fifteen pairs of slender steel columns standing in a circle rise and twist together, flaring out to form a circle whose diameter is wider than that at the base. At the top of the tower of twisted columns, back-lit plastic tiles spell out “TALLYWOOD.” Dan MacMillan hired product designer and School of Design instructor William Baron to design the sign, wanting something to “catch people’s attention.” A schematic of the sign was used as a logo for the shopping center and was pasted on trucks and printed on letterhead and bags. The need to be noticed in order to attract customers was not new to retailers and other commercial businesses, but the automobile changed the game. A sign as large and tall as Tallywood’s would be useless in a pedestrian-centered commercial area. By the 1960s, however, Raeford Road, was an automobile-centered commercial corridor, and the Tallywood sign is but one reflection of that." (Fayetteville Modern Architecture Survey, 2009)

The intent of this petition is to show support for the preservation and maintenance of the Tallywood Shopping Center Sign as an iconic and historic representation of modern Fayetteville. The sign is indeed historic and while it does not currently hold official landmark status, the people of this city who have worked and shopped at the Tallywood Shopping Center for nearly 60 years consider it an icon and symbol of Fayetteville's progress as well as it's past. It is imperative that we preserve places and landmarks significant to the cultural, social, economic, political, and architectural history of our city for the education, pleasure, and enrichment of our community. The Tallywood Sign deserves to be protected and enjoyed by future generations of Fayetteville residents. Please sign if you agree!!