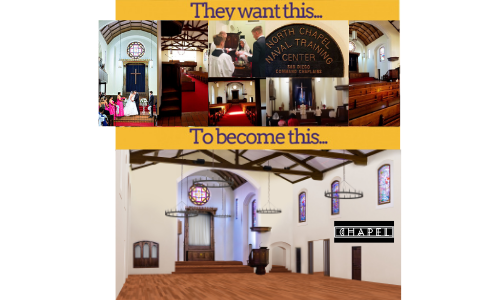 We want to save the North Chapel and keep it open and used for 'the purpose for which it was conveyed, in perpetuity'. The people of San Diego and the United States as a whole deserve to keep this historic building a chapel open to the rental and usage of the people and not turned into anything else.

The plans include removing historic handmade pews and organ from the main chapel and completely killing the attached side chapel, removing the altar, pews and confessionals from that space.

828 says they want to respect the historicity of the North Chapel and restore it, but do you think they really are making these changes to restore life into it, or to line their own pockets?

Who to contact now, to protest these plans that disregard and disrespect the wishes of those who came before us:

Please protest and write to the National Park Services (they were fooled into approving the plans to destroy the chapel; unaware of the history and implications they approved this plan) https://www.nps.gov/aboutus/contactinformation.htm and the City of San Diego.

Please protest and write the Mayor and the San Diego City Council Members (Elected representatives who have the right to legal action, in order to protect the North Chapel) https://www.sandiego.gov/citycouncil

Please continue to write to 828venues.com and their head, Tim Wirick and voice your outrage at them being HELLBENT on ruining our heritage here: https://828venues.com/contact/ and here 545 Kentucky Ave, Indianapolis, IN 46225 and here email: party@828venues.com

We are asking the City Council and Mayor to:
-To request an investigation into the secret sale of retail ground lease between McMillin and Pendulum Property Partners

-Investigate the secret plan to allow 828 Venues (828venues.com) to gut the interior of the historic chapel after December 31, 2018; and reopening as “Chapel” in Spring 2019 – While to date, no permits have been submitted.

-Ensure the North Chapel remains open and accessible to the public as it is today, beyond December 2018, without any closure while the investigation is being done.

Who to Contact to Ask to Help Save the North Chapel

* Pendulum Property Partners (Recently bought the section of Liberty Station which includes the North Chapel) http://pendulumpp.com/ let them know how much we care about the North Chapel and don't want it to be changed

* 828 Venue Management Company (The company who seeks out historic buildings to gut and turn into a ‘blank canvas’ and is planning to open the North Chapel in Spring 2019) Let them know that we don't want them to gut the historic and sacred North Chapel nor turn it into a party space.https://828venues.com/contact/

* San Diego City Council Members (Elected representatives who have the right to legal action, in order to protect the North Chapel) https://www.sandiego.gov/citycouncil

* Congressman Scott Peters (An ally, who wrote to the Mayor and the City Council, asking for the investigation) https://scottpeters.house.gov/contact

News has it that McMillin has sold Liberty Station to a company located in Irvine Ca., Pendulum (http://pendulumpp.com/)

Right now, we are asking the City of San Diego, to order an investigation by the City Attorney into what is happening with the North Chapel so that all the legal facts that protect the exterior, as well as the interior of the chapel, are brought to light and it will be publicly restated and enforced that the chapel will remain chapel for the people, at little or no cost, as originally agreed upon and not turned into a 'retail restaurant' or anything other than what it has always been since the 1940's.

They are still planning to close the chapel to public rental after December 31, 2018. We need to keep it open.

WHY THE PETITION?
McMillin is closing the North Chapel to the local community on June 30, 2018 (as of 6/23/18 this date has been extended to December 30, 2018 - thanks in part to all of the petition signers) and they are looking for a leasee; they are advertising it as a 'retail/restaurant' space. This is WRONG. We don't want the North Chapel to be turned into anything else than a chapel. KEEP THE CHAPEL A CHAPEL.

McMillin is going against all the agreements when given the North Chapel by the City for free.

"The Federal Government gave (The North Chapel) to the City, the City gave it to McMillin. $0 was paid by McMillin. The quitclaim deed reads: "This property shall be used and maintained for the public purpose for which it was conveyed in perpetuity, as set forth in the Program of Utilization Plan" contained in the application submitted by the grantee (McMillin).

The National Register of historic places: The Chapel is probably the least altered of the buildings altered in all of the Historic District (in Liberty Station), all wood furniture - including the pews, pulpit, choir loft, altar, organ an balcony railing- were designed for the church building and as were the stain glass windows, the brickentry and the decorative tile floors inside the entry.

The building has provided a significant community function and is a notable visable landmark. Moreover, the style, craftmanship and details of the building are noteworthy and warrant architectural merit.

This building is protected by the National Registry of historic places and Rehabilitation Standards by the US Secretary of the Interior's standards for treatment of historic property...The property shall be used as it was historically, or given a new use that requires minimal change to it's distinctive material; the historic character of a property (Chapel) will be retained and preserved.

You get a piece of property for zero dollars, you got (a deed) that says you're not to change it...The Secretary of the Interior says the interior is not to be changed. What is so difficult about that?

...and (McMillin) states that (the North Chapel) is underutilized... meanwhile they are stopping all the people who are utilizing the property..."

ABOUT THE NORTH CHAPEL
Generations of of Navy Sailors used this chapel for worship, regardless of their denomination. Since then, memorable weddings, religious ceremonies and even funerals have been performed at the North Chapel. It is one of the last buildings still used for it's original purpose. To this day there are still two religious congregations that use the chapel for their weekly Sunday and other holy day services.

Historic buildings like this should be protected. Please sign the petition to support the preservation of the historic North Chapel as a rentable chapel for all faiths, as it was meant to be, and not have it turned into just another ordinary space for events or a restaurant.

This is a one-of-a-kind historic chapel and there isn't another one like it in all of San Diego. There is a magnificent pipe organ, baby grand piano and choir loft. It is an elegantly beautiful chapel with exposed wooden beams and stained glass windows .

WHAT WILL HAPPEN
If McMillin has their way, after June 30, 2018 no one will be able to rent the chapel again for a wedding or any other event because they plan to turn it into a retail space or restaurant. This will desecrate a sacred space and leave at least two religious congregations who rent it, churchless. (https://libertystation.com/go/north-chapel)

WHAT HAPPENED BEFORE:
McMillan was given the Liberty Station Naval Training Center back in 2000 and was supposed to preserve, not destroy the buildings that San Diego gave to them; while sharing the profits.

Liberty Station is noticeably successful today and many believe that they have already made their money back and are wondering why they are moving forward with attempting to turn the North Chapel into another retail/restaurant/entertainment center.

There are still buildings left to renovate and open spaces that can be built upon and the North Chapel doesn't have to be one of them.

McMillin cited 'underuse' in an official statement to the press. This is the the same reason they used when they demolished the 'South Chapel' in 2010.

Locals complain that McMilliin had charged exorbitant prices for Chapel usages and that is why it might be underutilized during the week. (Sometimes upwards of $3,000 per use according to the KPBS article. ). Locals believe that the chapel should be available to the community for little to not cost; as a goodwill gesture. See article here from 2010 by KPBS: http://www.kpbs.org/news/2010/sep/17/developer-bre...

WHAT IS HAPPENING TODAY:
McMillin wants to change the North Chapel into a retail restaurant, again citing the same reason, 'underuse'. Today couples are being charged $1,000 for 3 hours chapel use. Many couples are young and cannot afford that amount. That could contribute to underuse, but it is difficult to deny that the North Chapel is a popular location for people seeking a wedding venue.

PEOPLE EFFECTED: Current parishioners of the two congregations that use the chapel, people who care about the historic nature of the building or the artistic value of the interior or people who attended while in the military at NTC, or peoplewere married there or have family whose funeral was there, or attended any other events there, and anyone who cares about and supports these people and more!

Our hope is that the designation of the building as a Historic Place and the past agreement with the City will come to light and allow us to preserve this chapel as a chapel; as it was meant to be.

Liberty Station has enough retail locations and restaurants, even still some empty buildings and plenty of land to create more restaurants on. The chapel doesn't have to be the place.

Please join us! The local government is listening as more and more people's voices are added, and we hope McMilliin will too. We hope also that any potential future leasee will learn the value of this building and think twice before committing to a retail or restaurant deal.

+++
Heaven help us and God bless you.

* What a local lawyer has to say about it: https://www.youtube.com/watch?v=2Z1JqtW8E9A

* Save Our Heritage Organization: http://www.sohosandiego.org/enews/0518northchapel....

Mr. Slayen shares heartfelt and solid reasons that McMillin should cease and desist (for lack of a better term). https://www.youtube.com/watch?v=Ojha5qw_II4&feature=youtu.be