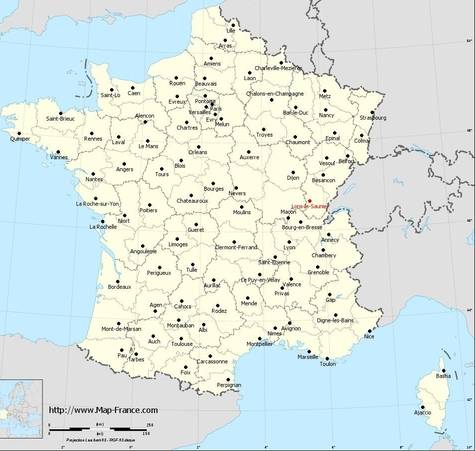 Pray for the Evangelical Church of Lons- le- Saunier

This month we are highlighting Eglise Evangelique Lons- le- Saunier or the Evangelical Church of Lons Le Saunier associated with CNEF and Assemblies of God.

Location: Bourgogne-Franche-Comte Region; No. of Churches in the Dept: 11

ABOUT THE REGION OF JURA

The Jura Department (pop. of 260,502, with the cities Dole and Lons-le-Saunier) historically was part of the “Free County of Burgundy.” After the French Revolution, it became one of the original departments in France, and later became part of the Franche-Comte Region, which is now the Burgundy-Franche Comte Region. This entire area was under occupied Germany in WWII.

Three main industries exist within the Jura Department: Cheese, Sunglass Factory & Development, and the wooden toy industry. Top name brands in wooden toys are situated in the Jura. Unemployment as of 3rd quarter 2016 is 7.5%, up 2% from former years. The Jura Center for Apprenticeship and Training serves non-factory based trades such as building, bakery, butchery, hair stylists, and car mechanics. A historic Salt mine exists north of Lons-le-Saunier. Because it is less industrial, it is home to many family owned specialty, artisanal shops, and vineyards.

Grass-fed and pasture-raised cows are a breed unique to the Jura Dept (and entire Franche-Comte Region) and provide the specialty cheese Franche-Comté. The Comté cheese is among the top cheeses in France. 57,000 tonnes of Comté cheese is produced annually, all with organically grown cows who are grass-fed without hormones. 7,000 people are employed throughout the region, including the farmers to the cheese production centers throughout the entire Franch-Comte region of both the Jura and the Doub departments. 6% of its cheese is exported to the USA, Canada, Russia, and Japan.

Although the Jura Dept. has tremendous beauty, it is surprisingly one of the best kept secrets in France and is not a well-known tourist resort area. Yet its Jura Mountains, rolling hills and vineyards, 20+ lakes and waterfalls, winter skiing sports, hiking and cycling paths, make this a perfect place for a get-away. Its smaller castles overlooking numerous valleys and small villages below add to the peaceful scenery.

Lons-Le-Saunier, sits as the capital of the Jura Department. With its surburbs and surrounding villages, population is around 125,876, although one source recorded 17,000 or so for Lons-le-Saunier alone. Although it dates to before Roman times, the entire town was burnt down in the 17th Century. Most all ancient structures were lost, and the roads radiating out from the town square are lined with 17th Century townhouses. A museum boasts the oldest dinosaur bones found in France. The salt mines and springs north of it has made Lons-Le-Saunier a spa center.

In spiritual modern day events, in the 1950’s a preacher from Switzerland passed through Lons-le-Saunier and decided the village needed to hear about Jesus Christ and His love. Signs and wonders broke out, with many healings and miracles occurring. He stayed and held meetings in the Paris Café. This opened the way for other churches to begin.

The genesis and history of French churches is highly valued. For those interceding, knowing each church's story can help you to know how to pray for the church.

Before the Evangelical Church of Lons-le-Saunier, as stated above, a movement of the Holy Spirit visited this small city when a pastor from Switzerland passed through and felt that he should stay instead of continuing to Paris. This was the early 1950’s. Miracles occurred regularly, including a recorded healing of a woman with MS and another healed from epileptic fits. One of miracles reported was that of God changing water into gasoline for a pastor traveling to the church. With no nearby gas station, he recalled Jesus turning water into wine. In faith, he poured water he had into the gas tank. Then, asked God to change the water into gasoline. He turned the key into the car and it started and took him all the way to Lons-Le-Saunier. In three years, people were driving over 150 kilometers to get to the town- some by car, others by train, and Vespers (motorbikes) because they were hungry for more of God. Eventually in 1957, a first pastor was set in place by the Assemblies of God.

Resulting from this outpouring, several other church plants were started in neighboring villages.

Over time, the work of bringing Jesus to the surrounding communities became very heavy and burdensome. By 1974, the church in Lons-le-Saunier came under a larger church in nearby Chalon-sur-Saône. Its numbers dwindled down to around 15 persons, all those over 62 years of age. However, undaunted, these 15 continued seeking the Lord and never gave up. By the 1980’s, relentless volunteer hours of the congregation renovated a new complete building, giving hope. Numerous pastors came and went – some stayed as little as 6 months, others 6 years, but the growing core kept its doors open. Graciously written on their website, translated, “While each new pastor had a different style, each contributed to furthering the work and words of the Gospel of Jesus Christ…over the years 100’s have come to know Christ and received the joie de vivre (joy of living) once again..many were healed and the disillusioned hopeless lives transformed.”

By 2012, current Pastor Alain Sivasleian and his wife, continue the work begun decades ago. Recent photographs on their website and Facebook pages reflect a growing church reaching out to immigrants and other cultural groups, building bridges between French natural born citizens and those from other nations. This is reflected in their priorities.

Evangelism–Reaching out to all those in need, all cultures and nationalities is a key value, and, the congregation aims to do this through the following outreaches. In addition, its obvious that the pastor and his wife have a special gift of hospitality. This extension of kindness is observed throughout their priorities and ministry, knowing that kindness [as shown through hospitality] leads to repentance [Romans 2:4].

Open Table Dinner: In addition to church picnics, the “Open Table” Dinner held every other Friday nights have begun in which different culinary dinners are cooked by other nationalities in their midst. The purpose is to build those bridges culturally to ensure that all are welcomed, to provide a format to meet each other and to understand each other better, to share the gospel of Jesus Christ, and making their church a welcoming and warm environment for all ethnic and people groups. While no list of various nations is given, one dinner served was Thai food, and, through photographs, the church has gathered not just French citizens, but those from African origins and other nations. Pastor Alain values this multi-culturalization of his congregation and shows it through creating this outreach.

Bible Distribution: To bring the Word to those who do not yet know Christ personally, the church congregation distributes Bibles throughout Lons-le-Saunier and area towns.

Worship and Music Outreaches: Still another outreach is the hosting of concerts, including open air concerts, with Christian Worship Bands. This is done in conjunction with the other churches in the city and with the CNEF churches in the region.

Meeting Practical Needs of Others: The church has launched a ministry to serve the food needs and other practical needs of others who are in a time of crisis, hunger, and difficulty. They aim to show the unconditional love of Jesus through these practical acts of kindness.

The Youth and Children: Understanding the importance of raising up disciples among the younger generation, the pastor himself has become involved in hikes, picnics, and other events with the youth. The youth meet weekly. The children are equally important and they continue to fashion their children’s and babies ministries.

The Word, Worship, and Bible Study and Intercession: The pastor himself is seen leading worship with a multiple of instruments and worshipers, and, weekly Bible Study and times for prayer are held.

[Please sign this petition and let them know we're praying for them!]