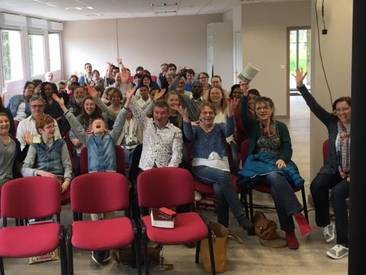 Pray for the Evangelical Church in Laval, France

This week, we are praying for the Eglise Evangélique la Bonne Nouvelle in Laval, France (Mayenne department).

Mayenne has the lowest number of Evangelical churches in all of France - only 4 churches for 307,500 people!

L'Eglise Evangélique la Bonne Nouvelle is one of the beacons of hope and light in this department and we want to encourage them!

Please sign the petition and leave a word of encouragement if you wish!

AREA PROFILE
Laval, an 11th C city, is the capital of La Mayenne Department (the “Maine” Department, pop 307,500, dates back to Gallo-Roman times), in the region of Pays de la Loire and is situated 60 miles south of the Atlantic Ocean and English Channel, not far from Mont St. Michel. A special French dialect remains as a mixture of Mayennais and French. Once a center of fine linens, La Mayenne is now 80% rural with livestock, apple orchards (cider), and became a cheese and diary center while at the same time boasts a Technology Center. Valuing education, percentage of students preparing for professional careers and technological fields exceed the national average. Laval was under German occupation during WW2 and was bombed several times and was finally freed by General Patton on August 6, 1944, with the Germans blowing up most bridges before they surrendered. Laval quickly rebuilt itself and continued on.