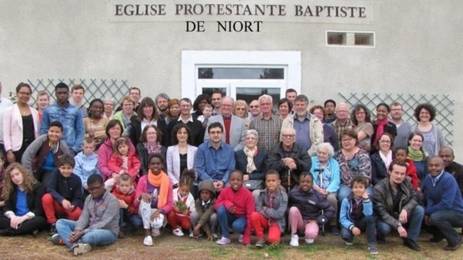 This week we are praying for the Eglise Protestante Baptiste in Niort (David and Laureline Perez, married 2013).

This church is located in Niort, France situated in the Deux-Sèvres department (79). Deux Sèvres has only 7 Evangelical Churches for 371,632 people.

Please sign this petition and let them know we're praying for them!

The Poitou-Charentes region stretches from La Rochelle on the Atlantic coast and curves northward through the original Poitou region, with Poitiers as the capital. Known as the region connecting northern and southern France, it’s not surprising that it has been in the middle of clashes throughout history: the Gauls and the Romans (56 BC), Muslim/Arab invasion and the French (Charles Martel stops Muslim takeover of Europe- 732), British and French (100 Years War: 13th – 14th C), Catholic and Protestant (the War of Religions – 17th -18th C), with Niort rising as a center of Protestantism. In 1604, about 80 people from Poitou left France and settled in Canada and the lands of Louisiana and Maine, called Cajun.

Today, the Poitou region cultivates wheat and oats and breeds cattle, horses, mules, and goats. Its goats provide over 50% of the goat cheese in France. While its largely rural, the region is atypical. Instead of declining in population as other regions we have discussed, population shows continuous growth over centuries. From agriculture to the aeronautics industry, this region claims one of the lowest unemployment rates in all of France. Over 1 million tourists each year visit a futuristic amusement park. Poitevin Marshlands, also dubbed the “Green Venice,” draw many by its pristine wildlife, beautiful islands and gardens. Once a land of counts and dukes, descendants of King Louis IV are still alive today in the Poitou region.

Niort, the home of this Evangelical Protestant Baptist Church, sits as capital of the Deux Sèvres Department. Ranked among the oldest towns in France, Niort grew inside the 12-13C Castle built by King Henry II of England and Richard the Lion-Heart. Today, In the midst of its being a strong commercial center, Niort has still managed to remain a quaint, “traditional old French town.”

Even with the lowest unemployment rates in France, Niort suffered severely from the 2008 economic crisis because it also serves as national headquarter for major insurance companies and as financial center for France. Resilient, it continues to rank 4th as one of France’s top financial centers, after larger cities of Paris, Lyon, and Lille.

Finally, despite its rich Protestant history, and, in spite of steady growth in population and business, only 4 evangelical churches exist within the city of 60,000 today (137,000 total with “suburbs”), and, with only 7 in the entire Deux Sèvres Department.

Beginning in 1894, The Evangelical Protestant Baptist Church of Niort later merged with two other churches in 1904. Forty years later, October 1945, it was revived. With many different pastors and locations, by 2000, the church set down roots in its current building. By 2012, David Perez spends his pastoral internship at this church and in 2013 was set in place as pastor.