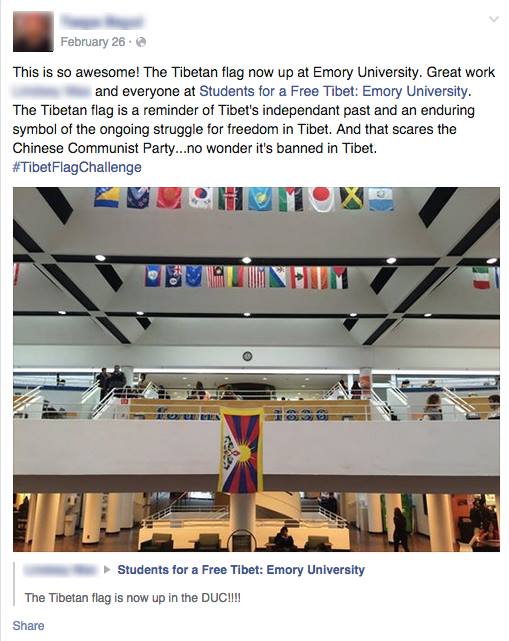 The Free Tibet Flag has been hanging in the center of the Dobbs University Center (DUC) among national flags since February, 2015, Ben Perlman, Director of DUC, states that the flag will be displayed for an entire year on the basis that the display is legal. The Free Tibet Flag is a symbol of the Tibetan independence movement and should not be displayed among national flags.

"Emory University strives to provide a welcoming, diverse and inclusive campus as an essential part of a community of academic excellence." In order to comply with this commitment, Emory should be dedicated to providing a non-biased and open environment.

However, the inappropriate display of the Free Tibet flag from Free Tibet Student Organization in the center of DUC violates Emory's mission statement of promoting a better campus life. This action indicates a political stance of Emory University and is offensive to many Chinese students.

We are initiating this petition to ask for political neutrality of the Emory Administration, and urging Emory to remove the Free Tibetan Flag from the DUC.