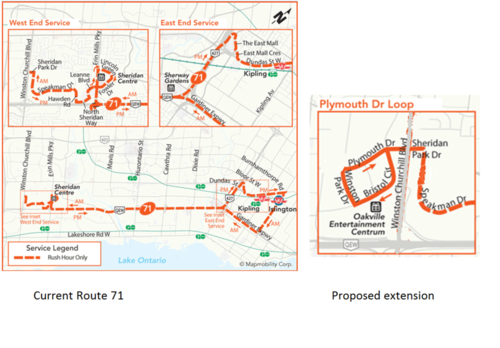 I would like to express my support for the extension of the MiWay service on Route 71 Sheridan - Subway (to become 102 in the Fall 2015) to include the Plymouth Drive Loop.

Such extension would accommodate the needs of the many employees of the expansive business park west of the Winston Churchill Boulevard with a minimal impact on the MiWay Services.Given that Route 45 already includes the Plymouth Drive Loop, there is already sufficient MiWay signage and other infrastructure in place.

MiWay Plan 5 is to be approved by the City Council in Fall 2015. At that time, Route 71 will become express Route 102. The number of trips in the morning and in the afternoon will increase. The proposed extension could be included in the changes that will be incorporated in MiWay Plan 5.