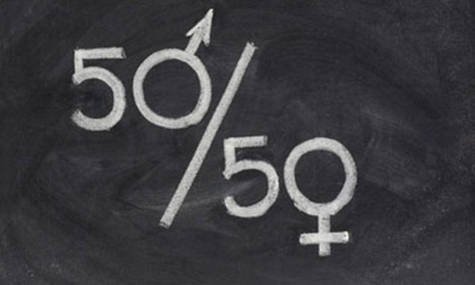 Pledge for a More Equal Generation

Our world is a sexist place; every day women and men face discrimination because of their gender. Sexism generally happens in four categories: education, politics, health, and the economy. For the past five months I have been researching and trying to answer the question, ”Why are women usually paid less than men?” This question has been asked since women started to work because men have always been valued more than women in the workplace environment. Through extensive research I have found that one of the reasons that women are discriminated against in the workplace is because of our unconscious bias. Unconscious bias helps people make quick decisions based on stereotypes. Unconscious bias is only unconscious because people do not want to acknowledge that they use gender stereotypes. By using our unconscious bias we are teaching our brain to base more and more things on the status quo. If people admit that they use stereotypes and realize when they use them, they will become aware of their unconscious bias.

Men and women should have equal opportunities for being promoted, hired, and paid. Being Promoted. Most women are not comfortable asking for a promotion. One of the reasons that this is happening is because women are not welcomed into society for being confident and aggressive; therefore, if society is more welcoming to women with those qualities, and a woman’s unique personality is accepted even if she isn’t aggressive, women will feel more comfortable asking for a promotion. Further, if women put themselves out there and ask for a promotion, a higher amount of women could be in executive jobs, making it so that there is a more balanced society.

Some companies’ excuse for their gender gap is that they do not want to be accused of promoting women just because of their gender, so they don’t promote them as much. If a company has been sexist and incriminated or sued for not employing enough women, they usually rapidly promote the women they have employed instead of training them. Then since the company does not have enough experienced employees they start losing money, and the value of the company goes down. The way to prevent this is to hire an equal amount of trained men and women, and if they don’t find trained women the companies need to train them themselves.

Most women are encouraged to become a nurse, elementary teacher, and sometimes a real estate agent. They are not being supported in a variety of jobs; only the ones they are encouraged to participate in. When women are interested in jobs that society does not have in place for them, such as technology and STEAM positions, being a police officer, directing or producing, teaching in a university or high school, and being in an executive position, they are often discriminated against because of their gender since they are stepping out of the roles that society wants them to play.

If an organization employs many women but few are employed in executive positions, would that count as gender discrimination? This is a question that many companies have been struggling with. The company Wal-Mart has been sued multiple times for gender discrimination. 90% of Wal-Mart’s employees are women, but there is a meager amount of women in executive positions. This is a question everybody should think about because it will help people figure out where they stand in gender inequality. Almost all companies should have an equal amount of men and women in executive and lower ranking jobs. Even companies that are specifically marketed to a certain sex should have an equal amount of men and women employees because what if some men could design great feminine products? Should society employ people based on their qualifications or sex?

90% of women are getting paid less than men. This shows that we still have a long way to go to close the gender gap. The country that has taken the most steps in closing the gender gap is Ireland. The gap is 88.1% closed. Ireland has almost closed the gap by realizing that women are necessary to the workplace environment. If every country acknowledges women are vital to all companies by showing all the benefits that they bring to companies, and they are not prejudiced against them, the gender gap will significantly decrease.

Some people do not know and do not want to admit that there is a gender gap. The Stanford Gender Research Center did a study where they sent out a fictitious resume for a STEAM job. There were two versions of this resume, and they were identical all except for the name; one was named John and one was Jennifer. The “application” went all over the United States to biologists, chemists, and physicists at academic institutions. Although they had the exact same abilities, John was favored far more than Jennifer. In fact, Jennifer was on average issued 4,000 dollars less per year, 13% less than John. This study shows that even some of the smartest people in the world have gender bias. We need to share this article and the results of the World Economic Forum gender gap report, for the way we are going in the United States the gender gap won’t be closed until 2134.

Each year the World Economic Forum publishes a gender gap report where they gather information globally about how 145 countries are progressing in the gender gap; they gather information about health, politics, economy, and education. This year the global average of people's earning are $11k for women and $21k for men. Ten years ago women earned an average of $6k while men earned $11k per year. Over the past ten years the gender wage gap has increased by $5,000 globally. If we do not value women, treat them equally, and become aware of unconscious bias, then how will we close the gap? If the world does not take these precautions, in 2025 the gap between men and women will be $10,000, varying with different jobs. Do we want little girls growing up knowing that men will mostly be valued more than them no matter what they do or how hard they work?

Moms are supposed to be more caring, kind, and friendly than men, and women in executive positions should not be expected to play the “good cop” role because of the stereotypes of what moms are supposed to be like. This is one of the reasons that very few companies, 14% to be exact, have women in executive positions. Warren Farrell, PhD, and author of Why Men Earn More says this also happens with policewomen; they are expected to be more gentle and easier to get away from.

Women should be more encouraged to teach at high schools and universities. Have you ever seen an elementary or preschool with mostly men teachers? Probably not. Have you ever seen a collage or highschool with mostly female teachers? Probably not. The separation between a female and male’s role start very early on in a child’s life, so by the time they are five-years-old their brains have already started to develop unconscious bias around gender. By mainly having women teach children in their early years, they learn that women are supposed to be the ones who care for them, and men are supposed to be the ones who show them how to be an adult. Warren Farrell says that if we are more open to mixed genders in all levels of education, starting from early on in a child’s life, their unconscious bias around gender will be lowered.

Motherhood and fatherhood should be valued equally, and men and women should have equal opportunities to gain custody. In the movie Kramer vs. Kramer, a fictional story, it reflects a common problem; when a couple gets divorced and they have a child, they have to decide who gets the overall custody. Usually the judge sides with the mom and the father only gets to see the child every three days or on the weekends. This is unfair because the judges are siding with the mom because of her gender and not necessarily because of which parent would take better care of the child. Since women can biologically breastfeed, our unconscious bias immediately associates the role of women as nurturers, and when most people think of a man being the overall parent they get uneasy. If men have a fair chance of gaining custody women will have more time to work and ask for promotions; by having more men gain custody we are closing the gender gap.

All fathers should be able to take some amount of paternity leave. Deseret News National says that dads should take paternity leave because it will show that fathers are just as important as mothers in a child’s life, it will help them bond with their child, and give the mother some time to rest or go back to work if she wants. Another reason to let dads take paternity leave is because more women will get promoted; maternity leave is a main reason why women get paid and promoted less than men.

Often men are not supported as elementary teachers because in our society abusers are men 80% of the time. If a man is being especially nice or friendly to his students then he is more likely to be falsely accused of molesting or sexual abuse. Society needs to accept men as being as open,caring, kind, and gracious as women.