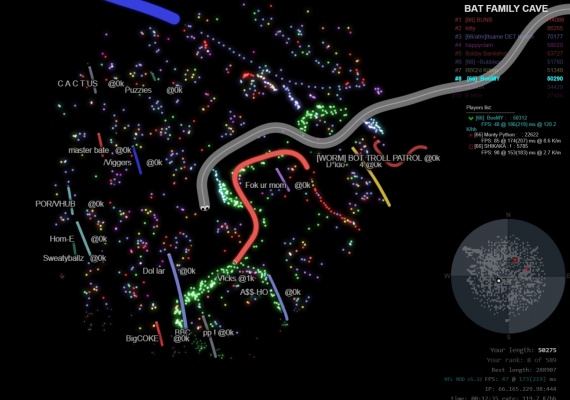 Hello My Name Is [BAT] BooM MooM. I am a dedicated Slither Player. I am speaking on behalf of a world wide Slither Community, whom love the game you have created. There are a couple things we would love for you to consider Mr. Howse.

First and most importantly is the harassment within the game. These trolls in your game have found ways around your nickname filtering/censorship process and use it to send inappropriate messages across the servers worldwide. Not only that, but the trolls are using 3rd party applications, such as op-bots.com, to generate bot storms to multiply and amplify their message a hundred-fold. The bot storm service enables the player to generate hundreds of bots with customizable nicknames to flood your servers, effectively:

Your game is beloved by kids and adults alike, but the ability for people to spam these messages is directly harming others of all ages and is considered cyberbullying. Consider the following names used during a botstorm and their type of harassment:

These are merely a small fraction of the many names used. As it stands today, there are multiple players using the 3rd party applications on a daily basis to fill your servers with bots using such names. Many players have taken to social media, reddit, and discord to lament on the game’s current state, specifically its playability, and impact on mental health, all due to the inappropriate bot storms.

Secondly, the game has steadily increased in latency/lag issues. More and more people are leaving the game due to the amount of lag they are experiencing on servers that they used to experience acceptable levels of playability years ago. From increased number of lag spikes during game play, to an overall higher latency, the game becomes unplayable by standards of almost all other comparable online multiplayer action game. By the same gaming standards, many tech savvy players, with top notch gaming systems and the best internet have still been plagued with very inconsistent lag. The same can be said of mobile players playing on both WiFi or 5G, while on high end phones such as Samsung's and iPhone's latest flagship models.

The hope of this petition is to encourage you to invest back into the game by addressing these two key areas. We believe that efforts on these two fronts would drastically improve the gaming experience of Slither.io and yield an increased number of players by boosting overall ratings and encouraging retired players to return to this beloved game. You have really done something great when you created Slither.io. Please strongly consider returning the initial joy and playability of the game back, Mr. Howse. There are many players that would be willing to pay a small fee to help compensate you for your time spent working on these issues. We care about Slither.

Thank you so much for your time and consideration, [BAT] BooM MooM (North American Servers),on behalf of the Slither community world wide. boomslither@gmail.com

To potential patrons:
We are not currently accepting donations. If donations are needed in the future, we will reach out again with clear information of how such patronage would be allocated/used.