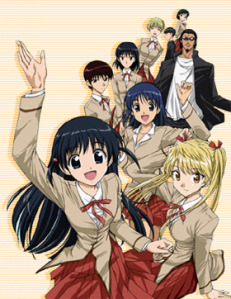 Every School Rumble fans know this. They love the anime but they are never satisfied with the ending. It's really surprising to see such a successful anime(season 1 & 2 produced) was only being renewed for two episodes in Season 3! Therefore, we demand a remake on the season 3 anime at least from episode 1-24 of the season as it is really important in the overall story development! No doubt, it's just another one of those Eri-Harima twist of plots but that is exactly what fans love to watch!

Apart from that, it is also rathersad as tohow the manga leaves a cliffhanger feeling within its readers and causes everyone to wonder what could happen, should happen and is going to happen next! Therewere too manyloose ends to stop just there at manga book 22 and School Rumble Z!

Please all we are asking is for more School Rumble. It doesn't have to end this way!

We promise to buy all School Rumble original products. As long as you produce them, we'll get them!!! You have a huge demand for this amazing anime/manga so cancelling the season 3 episodes 1-24 was just not right! Please bring back the anime! 10 years on and we still very much love it!!!