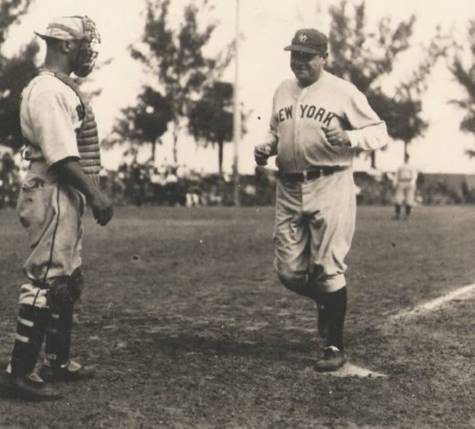 George Herman Ruth came along at just the right time to save MLB from the "Black Sox Scandal" of 1919. Because of Babe Ruth the distasteful residue of gambling never fully impacted baseball.

Babe's home runs not only revolutionized the way the game was played but they also drew attention away from a devastating grand jury inquiryinto the 1919 World Series. Babe Ruth put people in ballparks all over the country.

When stricken with a genetic cancer, Babe Ruth was a courageous recipient of the first chemotherapy treatment. He was told it could kill him. Babe Ruth said he would do it if it would help to cure others.

He lived his life as freely as anyone and pushed the limits of his talent beyond anything seen in baseball before or since. He stood up for what he thought was unfair and wrong.

For his contributions to our national pastime, his contributions to children all over the world, for his humanitarian works and for his love for his fans everywhere. The love is returned to this day by his fans. Babe Ruth single-handedly saved the game of baseball with his mighty bat, his charismatic personality and his inherent sense of fair play. He wrote the blueprint for the exciting home run!

As an ambassador for the game Babe Ruth made it possible for baseball to become the international game it is today. Babe was not deterred when it was not possible for minorities to participate in Major League Baseball. Babe spoke up on behalf of these fine men. He barnstormed with them and his actions and words on their behalf has not gone unnoticed by baseball historians.

We do want to take #3 off the field, we love to see it. We do not want a game once a year with players wearing #3 on their backs. We would like MLB to honor Babe Ruth and have his #3 hanging in every baseball stadium and park.

Please help us to achieve this tribute for an American icon, George Herman "Babe" Ruth.