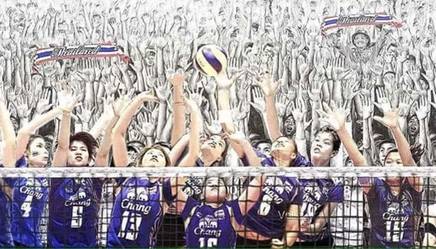 On behalf of Thailand Volleyball fan,
We just watched volleyball game between Thailand-Japan. That's very fantastic match during game I appreciate their agility & willful that made it's a good match until come along to final set(5sets). THE REFEREE gave 2 yellows cards while ......
1. Thailand lead 12-6 , Thai's coach tried to put the button for substitution his player to be change the tactic. but it doesn't work & this referee gave red card !!! (Coach decided to constant protest to 2nd referees.)
2. He did -2point for Thailand when draw at 13-13 that made JPN lead 14-13 suddenly and this is a match point!!!!!

We believe that the fair play should be in the FIVB association. As long as we know we need you to reconsider whether what do you do for this & make all peoples who have still doubt about this judgement from this guy.(referee)

Finally, all people in the world not even only the Thailand(volleyball supporter) are respect in FIVB & we hope that you will reconsider & clarify for making everyone clear!
"In the other hand l totally felt someone stolen the win that normally we call "unfair"
!!

we want some Help from FIVB

Clearly that the women volleyball olympic qualification 2016 match between Thailand vs. Japan was not a clean game. This is not about questioning the ability of the Japanese team but the transparency of referee's judgement behind the Japanese host. I believe that FIVB, as an international volleyball federation should take immediate action to investigate the case in order to prove an innocence of the referee as well as a spirit of the organizing committee under this match.