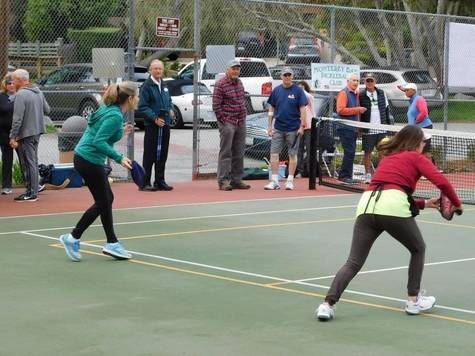 In September, 2016, pickleball court lines were painted on 1 of the 2 tennis courts in Via Paraiso Park (Monterey, California). This was the result of the approval of a Neighborhood Improvement Project grant, okayed by the neighborhood and the city Parks and Rec Board, to add Pickleball to the public park's activities. Only 1 of the courts was painted due to a weather change. The other court was to be painted in the Spring, 2017. Now, TENNIS PLAYERS HAVE PETITIONED THE BOARD TO DISALLLOW PICKLEBALL IN THE PARK. They believe they cannot play tennis if there are other lines painted on the court. Please sign this petition if you believe in shared use of public spaces. Currently, tennis players use the courts for 12-15 hours a week. Pickleballers want to use the courts for 15 hours a week. We want to share. Given that there are at least 63 daytime hours in the week (8 am - 5 pm), this should be possible. Let's keep public spaces public. Help us by signing this petition.