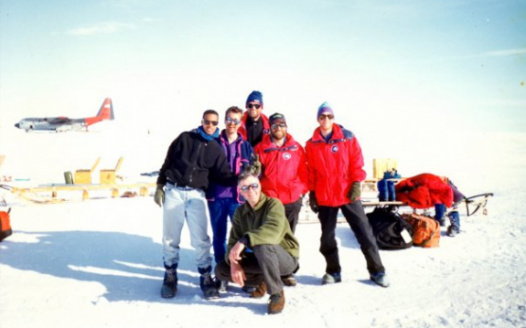 Petition for University of Maryland to Reconsider Tenure Decision in Case of Dr. Derrick J Lampkin

I am writing in support of Derrick J. Lampkin receiving tenure and promotion to Associate Professor at the University of Maryland. I have been a colleague of Dr. Lampkin’s for nearly 15 years and am shocked that his record is not sufficient for this promotion. I recognize that an unsolicited letter of support is untraditional, but as a member of the cryosphere community, I am fiercely advocating for him.

UMD outlines 4 key qualifications in the Policy & Proceedings on Appointment, Promotion, and Tenure for the rank of Associate Professor. I know Dr. Lampkin as a valuable member of the cryosphere community, so am mostly writing about his accomplishments as a researcher and his service to our community. However, I also read through his dossier and outline how Dr. Lampkin meets each of the qualifications set by UMD.

1. have a high level of competence in teaching and advisement

Dr. Lampkin’s teaching evaluations are consistently good, and he maintains solid enrollment in his classes. He has developed several new classes, including one that directly links work done at nearby NASA GSFC and students at UMD, hopefully opening up internships and research opportunities between the two. In candid comments from students in his classes (included in his teaching portfolio), even when they are confused by course content, they appreciate his enthusiastic teaching style and his genuine care for them as individuals.

Dr. Lampkin has advised a large number of undergraduates, Master’s students and Doctoral students – both formally and informally. At UMD he graduated 1 MS and 2 PhD students. Four of his recent publications are first-authored by graduate students, which is an important metric for the students and the department, and demonstrates his effectiveness as a research advisor.

Dr. Lampkin has 21 publications: 12 as first author, 4 first authored by graduate students, and 10 since starting at UMD. He has acquired 12 federally funded grants, totaling $2.2 million. These metrics alone would satisfy tenure requirements in most universities.

Research from Dr. Lampkin’s group focuses on using remote sensing, field observations, and numerical models to understand how water flows through, and impacts, glaciers. This work has led to major advancements in understanding how glaciers might change in a warming climate. As a community, we largely thought that surface water only impacted glacier flow once it got to the bed of a glacier. Dr. Lampkin’s work showed that surface water can also weaken shear margins, causing glacier acceleration. This observation shifted our thinking about the importance of lateral margins and the role of surface water on the Greenland Ice Sheet.

As shown in his publications and funded grants, Dr. Lampkin is actively collaborating with other glaciologists to address questions of surface melt water production, runoff, and infiltration. I have always been impressed by his ability to engage a wide range of researchers and get them excited and curious about his research questions.

The clearest metric for continued productivity is the number of publications and funded grants, both of which have increased for Dr. Lampkin since he began at UMD in 2013. He has 10 publications (average 2/year) and 5 federally-funded grants (1/year) since joining at UMD.

4. shall have served the campus, the profession, or the community in some useful way

Dr. Lampkin does more than his share of tough service jobs, an example of his commitment to being an active community member. He is an Associate Editor for the Journal of Geophysical Research – Earth Surface, which is one of our top journals in glaciology (acting as an Associate Editor is an enormous time commitment). He is also on the Executive Committee for the Cryosphere Section of AGU. These service responsibilities are all substantial jobs, year-round. He is also active as a reviewer and panelist (for both NASA and NSF panels).

AT UMD, Dr. Lampkin is a University Senator, and the Undergraduate Program Co-Director in his department. Again, these are service obligations that require year-round attention, and are a lot of work. As highlighted in his dossier, he is committed to supporting students and their research, and being engaged in these programs helps him achieve that.

It is noteworthy, and understated in his dossier, that Dr. Lampkin has devoted a lot of effort supporting minority students, both formally and informally. He created a student mentoring program for minority students in his department, and became the informal advisor to a number of minority graduate students. Following up on efforts to diversify his department, he is active in their recruiting efforts. While these efforts alone don’t justify tenure, combined with his research and teaching contributions, they do. Geoscience remains the least diverse STEM field, and Dr. Lampkin is one of only a few black glaciologists in the US. Not allowing his research and teaching accomplishments to speak for themselves is an additional obstacle that he should not have to confront.

I hope this letter has served to express my unwavering support for Dr. Lampkin’s tenure and promotion. Please be in touch with any questions.