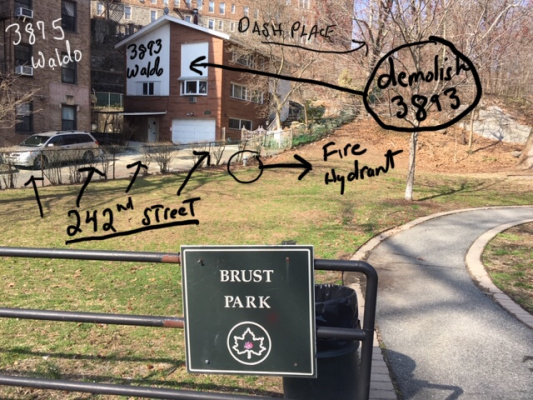 PETITION TO the NEW YORK RESTORATION PROJECT (NYRP) TO WORK WITH THE COALITION TO SAVE BRUST PARK TO BUY LOT 890 AT 3893 WALDO AVENUE, BRONX NY 10463

TO WORK WITH THE COALITION TO SAVE BRUST PARK

Brust Park is one of the oldest parks in Fieldston, Riverdale. The City bought this property on December 30th, 1882 through condemnation and Mayor Fiorello H. LaGuardia named it Brust Square in March 29th, 1940 in memory of Corporal Charles Brust, a Bronx resident and soldier who gave his life in World War I. Commissioner Henry Stern named it Brust Park in 1997. [1]

Brust Park is composed of a lower and upper section. The lower section is cradled within Waldo Avenue, Manhattan College Parkway and 242nd street, including the undeveloped portion of 242nd Street which borders block 5778 - lot 890 known as 3893 Waldo Avenue. The upper section starts at Greystone Avenue and borders Manhattan College Parkway to the north. The park ends at Fieldston Road. As visitors walk in the meandering stone trail intersecting the park from east to west, they enjoy the garden by the entrance of the park, a small pond, a green flat area for play and recreation, wooden benches for seating, the sounds of a flowing brook as they climb the stone steps as well as a large and healthy designated wild forest area with more than 15 types of trees. [2] In the upper section of Brust Park there is a playground for children, benches and tables to sit outdoors and like the lower section of the park, residents of Riverdale can delight in nature, looking at the variety of flowers, trees and wildlife prominent in this parkland, each season completely different and breathtaking in its beauty. Brust Park also brings the diverse population of Riverdale together. Sometimes, Manhattan College students gather in the park to engage in different activities, one time a student was playing his violin late at night surrounded by the dark canopy of trees, other times the Stewards of Brust Park organize It’s my park community days in which volunteers help with gardening and beautifying the park. Seniors also chat, read and sunbathe in the park while children run around and discover the wonders of nature. As a true sanctuary from the hectic life in NYC, Brust Park is a place where different communities and different demographic groups come together to be in nature and as a result people get to know each other, fostering a positive atmosphere of understanding and empathy for all. The City purchased Brust Park two decades before the rapid development of the Delafield Estate in Fieldstone, this decision saved Brust Park, its ecosystems and wildlife. The healthy and thriving forest in Brust Park, with trees older than the park itself provides quality of air for all of us. With the effects of global warming displacing and devastating communities worldwide, we need to protect this old forest, with more urgency today than ever before.

Fieldston and the surrounding area of Brust Park was developed at a greater speed once the Interborough Rapid Transit subway was extended to West 242nd Street in 1908. The 257 acres of land known as Fieldston, purchased by Major Joseph Delafield in 1829 became available for purchase to interested developers in 1910 by Delafield’s heirs. According to the Fieldston Historic District Designation Report, the Delafield Estate slowly built the infrastructure in Fieldston (installing sewers, water, gas and later electricity) creating the conditions for people to inhabit and develop the land slowly. Because the Delafield Estate had complete ownership of the entire land, including roads and wooded areas, they avoided the standard grid system imposed by the rest of New York City, resulting in a city design that took into consideration the original woodland, rocky terrain that impeded developers at the time from changing this landscape. [3] Past developers adhered by these rules. “Purchasers may thus secure, within the limits named, as much ground as they deem necessary for the proper landscape treatment of the wooded knolls, dells and hillocks.” [4] Because of these early developing rules, Riverdale is unique in its varying terrains, winding streets and pockets of green between historic houses and buildings. Unfortunately, areas surrounding Brust Park, such as lot 890 don’t fall within the perimeters of the Fieldston Historic District and every green space, bedrock, hillocks and original landscape not currently protected is vulnerable to investors and developers even if the terrain is challenging to build such as is in the case of 3893 Waldo Avenue, the property currently bordering Brust Park.

We, the undersigned, support the efforts of The Coalition to Save Brust Park in working with the New York Restoration Project to purchase lot 890 at 3893 Waldo Avenue from developer Jeff Torkin, JDT Consulting. We especially appreciate the NYRP’s work in upper Manhattan and the Bronx, protecting areas that may otherwise become more densely populated. This lot is small, 8,700 square feet, triangular, and comprised largely of a bedrock cliff. The new owner’s plan according to public demolition records is to immediately demolish the lot’s current single-family house at the bottom of the precipice in the property and start construction on a 29-unit apartment building. According to the proposal, measured from Dash Place, the building would stand four to six stories high and would offer 14 parking spaces, its entrance facing the very narrow Dash Place. According to our local Riverdale Press [5], we have little reason to trust in these initial plans, as this same developer ruined the historic and cherished Villa Rosa in Riverdale. Even as a neighbor who has served on the Fieldston Historic District, he did this.

Lot 890’s northwest side borders Brust Park’s stable and thriving forest area. As residents who live near and frequent Brust Park, we too believe, as does the NYRP, that all New Yorkers deserve beautiful, high-quality public space within ready walking distance of their homes. We are concerned about how this development project could negatively impact the health and diversity of the Brust Park ecosystems, by:

1. Casting a permanent shadow in the designated forest area of Brust Park

The old and diverse forest of Brust Park will have permanent shading if a building four to six stories high is built in lot 890. This will diminish the already limited direct sunlight to the fragile forest.. Permanent shading could disrupt the natural propagation of the forest and the healthy reproduction of the tree population, potentially minimizing the amount and diversity of trees, in the long term disrupting or destroying this thriving ecosystem.

2. Changing the hydrology of the area

Lot 890 is composed of large outcroppings of Fordham gneiss, like in different areas of Brust Park. The current bedrock in the property is shallow and disrupting it or adding fill to this landscape will forever change its topology and could possibly alter groundwater flows that support the park‘s ecosystem and the area’s sewer system. The soil in this lot absorbs storm-water all year round. “The Greenbelt Urban Complex (GUB) and Urban Greenbelt Complex (UGG or UGD) soils in this region of Brust Park are well drained with a medium and high runoff, depending on slope.”[6] Because the landscape is not developed, stormwater is absorbed by the soil helping the tree population in the park and perhaps contributing to the ephemeral brook now flowing in the lower level of Brust Park. Current efforts are underway to assess the health of the Brust Park stream through looking at the benthic invertebrates in the water by the ecological project manager for Friends of Van Cortlandt Park involved in the “Daylighting Tibbetts Brook Project.”

The unique steep topography and winding roads of the area surrounding Brust Park, connect the different neighborhoods, the public land is visible to all of us, even from larger distances. Residents can see the dense population of trees even from the 1 train as they approach 242nd Street. Neighbors living in Dash Place and Greystone Avenue have a view of the trees as well as residents living in Manhattan College Parkway and Waldo Avenue. Students at Manhattan College, seniors at the Methodist Home Nursing and Rehabilitation Center and children on their way to school every day can admire the open and vast view of this public park. Developing lot 890 will obstruct the visibility to Brust Park, especially encroaching its forest, changing forever its aesthetics.

In fact, the NYC Department of Parks and Recreation notes that, “The Bronx parks are important, however, in that they comprise a total park system, as opposed to the haphazard way parks took shape in early Manhattan. In 1881, John Mullaly (honored by Mullaly Park in the Bronx), formed the city's first open–space advocacy organization, the New York Park Association, to advocate for the acquisition of nearly 4,000 acres above the Harlem River. The Association helped secure State legislation in 1883 to establish six large parks and three broad parkways. On December 12, 1888, Bronx, Claremont, Crotona, St. Mary's, Van Cortlandt and Pelham Bay Parks, as well as Crotona, Mosholu and Bronx-Pelham Parkways, were vested to the City of New York, quintupling the City's green space overnight.” [7]

Brust Park itself was created during this historic time frame.

Lot 890 at 3893 Waldo Avenue has had a few owners in the 20th and 21st century and they have never developed this landscape. The previous owner used the pre-existing rocky terrain to create cascading potting sections to plant flowers and vegetables. If we can convince current owner Jeff Torkin, himself a resident of Fieldston, to sell this property, the Coalition to Save Brust Park can follow the leadership of the New York Restoration Project and work with other organizations in our neighborhood to plant more trees, develop a community organic gardening project, offer educational programs in science and art and make this landscape an active laboratory for learning and working together. We can also partner with the NYC Honeybee Conservancy and sponsor beehives to continue the efforts of protecting bees and encourage pollination of local native plants.

The Coalition to Save Brust Park urges the New York Restoration Project to support our efforts in buying lot 890 at 3893 Waldo Avenue from current owner and developer Jeff Torkin of JDTL Consulting LLC. We are committed to write petitions to current owner urging him to sell this land, or not develop it. We are committed to initiate and help with fundraising efforts to help the city buy this property with your support. We are aware Brust Park went through two expansion projects in 1951 and 1964 and together with the New York Restoration Project and the advice of NYC Department of Parks & Recreation we can expand Brust Park once more protecting it for other generations to enjoy.