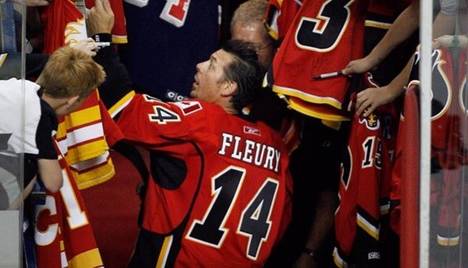 Retiring the number of an athlete is an honor a team bestows upon a player. Who better for the Flames to honor than Theoron Fleury, a player who has shown his skill and love for the team on ice as well as his passion for the city of Calgary, the fans and the people of our Nation.

Theo played over 1000 games in the NHL, scoring an NHL career total of 1088 point, 830 of them with Calgary. Theo was the Flames scoring leader for an entire decade!

A 4 time Molson Cup winner, representing Calgary in 7 All-star games, more than any other Calgary Flame, and leading the flames into the playoffs for 7 season over his 11 season career. Theo contributed 11 points in the 1989 playoffs, to win first Stanley Cup championship in Flames franchise history.

Off Ice Theo has dedicated his post hockey life to making a difference in the lives of so many. An advocate for Crohn’s disease which has since been overshadowed by his timeless efforts to fight for sexual abuse victims nationwide.

Finally, Fleury loves Calgary, stating that he had to retie a Flame in 2009 when announcing his retirement. He thanked the Flames for allowing him to comeback, and expressed joy at how his career ended. "I get to retire a Calgary Flame. I HAD to retire a Calgary Flame. It’s been a long journey. It’s time to put down some roots. And there’s no better place than here," states Fleury when he decided not to seek an offer from any other team.