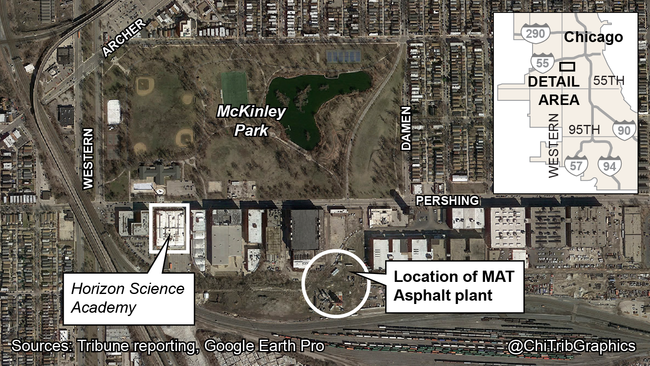 Residents for a Safer & Healthier Community

We are writing this letter of petition to:

We the undersigned residents of the Southwest Side of Chicago, formally urge the IEPA to deny the MAT Asphalt Plant any further operating permits at its current location. The plant was built at 2033 W. Pershing Rd. Chicago Il 60609, without community input or discussion, and we believe the initial IEPA permit was issued under false pretenses.

The plant is directly across from a park, immediately adjacent to an education center, and in close proximity an elementary school. The air quality in the industrial corridor of the Southwest Side is already poor, and we don't want the additional diesel pollution, asphalt fumes, and increased particulate matter that the MAT asphalt brings to our neighborhoods.

We ask that you exercise your power, and honor the IEPA's commitment to safeguard environmental quality by denying MAT Asphalt their operating permit, and requiring the plant to move to a more suitable location. Thank you.

This is where you come into play - sign the petition and help keep clean air in our communities!

Note:the text below is mostly taken from the Chicago Tribune article by Tony Briscoe of June 29, 2018 "Worried about fumes..." A link to the full article is at the bottom of this page.

We have an Asphalt plant in the McKinley Park community and they are waiting to get a 5 year permit to pollute our air. Chicago suffers from inequality in many forms, including uneven exposures to pollution and toxins throughout its many neighborhoods. Now, a sophisticated new map of the Windy City shows how, even among the dirtiest streets, not all pollution is created equal.

That’s because some neighborhoods are better equipped to handle these environmental risks than others—perhaps because they’re wealthier, or have more time, or enjoy closer access to their political representatives. Meanwhile, residents of low-income or high-minority neighborhoods can sometimes be all but forgotten by their representatives. It’s a distinction of which policymakers must be mindful when planning new developments in Chicago.

MAT Asphalt, at 2033 W. Pershing Road, will be fully operational in July, raising concerns among residents about potential exposure to lung-damaging pollutants, falling property values and harm to wildlife.

Many neighbors say they were blindsided by the plants construction, learning about it only after noticing the silos that were erected in March. They accuse Ald. George Cardenas, a self-proclaimed clean-air advocate, of changing allegiances and the Illinois EPA of failing to notify residents about construction plans. Fueling their suspicions, the owner of the plant has made campaign donations to Cardenas and organizations affiliated with him, and is a member of a politically connected family that has raked in a fortune in city contracts over the years.

For more than a century, McKinley Park has been bordered by the city's historic Central Manufacturing District, a 265-acre industrial park with easy access to the rail yard and the South Branch of the Chicago River. Today, however, most of the large warehouses along Pershing Road are vacant.

Cardenas, whose ward includes McKinley Park, Back of the Yards and Brighton Park, is chairman of the city's Health and Environmental Protection Committee. He has previously lamented the devastating effects pollution has had on Chicago, including the city's frighteningly bad asthma hospitalization rates, which are twice the national average. But in an April community meeting, he praised MAT Asphalt for bringing blue-collar, middle-class jobs to the area and cited his faith in the company's new pollution control equipment.

I do want to ameliorate, to tackle these (health and environmental) concerns, but, at the same time, I have a dual role as alderman to develop, to create jobs and improve quality of life in the community, Cardenas said in May. I have to balance those out, and I think we're doing that in this case.

"The now infamous map of Chicago's pollution impact by the Natural Resources Defense Council(citylab.com, tab 'environment') clearly shows much of Alderman Cardenas's ward (12th Ward) has the worst pollution in Chicago. We need to come together and make our community's air cleaner and our quality of life better.