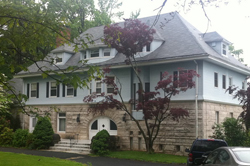 PETITION TO SOUTH ORANGE HISTORIC PRESERVATION COMMISSION
from the
Ad Hoc Committee for Alternatives to Demolition of Convent / Mansion at Marylawn, and Residents and Taxpayers of Montrose Park Historic District and the West Montrose Neighborhood

The undersigned persons hereby oppose the demolition of the convent and mansion at the corner of Scotland Road and Montrose, owned by the Sisters of Charity.  We strongly urge you not to issue a Certificate of Appropriateness for said demolition.

Alternatives to demolition must be explored before this  large and beautiful historic mansion, next to the Marylawn Academy on Scotland Road,  may be torn down.  It serves as an iconic architectural feature of the historic district, and is part of the gateway to the Montrose Park Historic District as you enter or leave South Orange.  Its demolition would impair the historic district and pave the way for other tear-downs.

Replacing this beautiful mansion with either non-historic single family or multi-family structures is inconsistent with the neighborhood and community character in the historic district which we have worked so hard to preserve over the last few decades here in South Orange.

The Committee for Alternatives to Demolition of Convent/Mansion at Marylawn