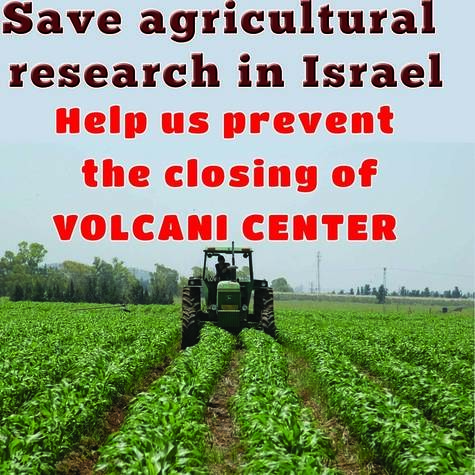 Petition to Save Volcani Center

Please help us save Volcani Center and agricultural research in Israel

The Agricultural Research Organization,Volcani Center, of the Ministry of Agriculture and Rural Development, Israel, (Volcani in Wikipedia; Friends of Volcani) celebrates 95 years of research excellence this year. Originally created in 1921 for the benefit of all the residents of the land, it has long been a world renowned agricultural science research center, responsible for the vast majority of Israel’s achievements in agriculture. The State of Israel enjoys the fruits of Volcani center's manifold research achievements, and benefits from the many international ties formed during joint scientific and development projects. Research groups at the Volcani Center collaborate worldwide on a broad range of topics involving agriculture and the environment, including improvements in crop and animal production, food security, soil and water resources, and food quality, storability and safety. The products of Volcani Center research are recognized all over the world, and serve as a model for international scientific and agricultural activities.

In March 2016, the Minister of Agriculture and Rural Development in Israel announced a plan to relocate the Volcani Center from its current location in the center of Israel, where it serves the needs of farmers around the country, to a development area in the northernmost part of Israel, which is home to less than 20% of Israel’s agricultural production. The current central location of the Volcani Center enables daily contact with farmers nation-wide, leading universities, major R&D and agri-tech companies, and foreign visitors. Closing or relocating the Volcani Center to a remote outpost will cause catastrophic damage to agricultural production, education and outreach in all parts of Israel, particularly at this critical time of global warming and its already devastating effects on food and water security.

The relocation proposal makes it difficult to attract and retain new scientists and technical staff, thus limiting research. Relocation of a small and devitalized research center to a far-distant development area that cannot support its activities will result in closing of the Volcani Center and the end to Israeli agricultural innovation as we know it today.

We welcome your show of support as a signatory to this petition to reject the proposed move and evisceration of the Volcani Center. We believe that the international research community can be of great help by voicing their concerns. Please feel free to forward this petition to your academic colleagues.

We, the undersigned faculty and staff at academic and research institutions around the world, oppose the transfer and marginalization of the Volcani Center. The basis for maintaining a nation is its ability to provide food for itself, especially a nation such as Israel that is surrounded by enemies and which is threatened by international boycotts. An enfeebled Volcani Center will bring disaster upon Israeli agriculture and hence upon future generations.