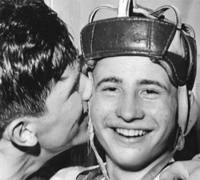 Doug Woog is the face of hockey in Minnesota, and, as a native of South St. Paul, represents the very finest of our community, not just from the standpoint of hockey, but also as a neighbor, a friend, a mentor, a coach, a teacher and a citizen. He was recently honored with the Cliff Thompson Award, given by the Minnesota Hockey Coaches Association in recognition of his many years of service to the sport of hockey.

It is fitting that South St. Paul, Doug's boyhood home, and city where Doug's hockey future had its genesis, honor Doug by renaming the ice arena in appreciation of the honor and recognition he has brought to the city. The name "Wakota" was adopted when the arena was built, but has no real meaning as it is simply a contraction of Washington County and Dakota County. Since the arena has no affiliation with Washington County, nothing is lost and no slights should be felt with the change to the more appropriate renaming.
A brief review of Doug's hockey career and contributions, as compiled by the U of M Athletics Media Relations Contact John Romo, willleave no question as to the appropriateness of this renaming:
A three-time All-State selection as a prep at South St. Paul, he became an All-American at Minnesota under head coach John Mariucci. He then followed his playing days with an illustrious coaching career which took him from junior hockey to high school to the University of Minnesota. Heavily involved with USA Hockey throughout his career, Woog was also an assistant coach with the 1984 U.S. Olympic Hockey Team
Woog had a spectacular run as head coach of the Golden Gophers. In his 14-year coaching career, Woog led the Golden Gophers to an NCAA-record 12 consecutive tournament appearances, including six trips to the NCAA Final Four. He amassed a staggering 389 wins during his tenure, more than any other head coach in the history of the hockey program to that time.
His connection with Golden Gopher Hockey remains strong as he is in his second year as analyst for Fox Sports Net. He appreciates the opportunity to keep preparing for an upcoming opponent and offering his unique and often colorful insight into the game.
He was inducted into the US Hockey Hall of Fame in 2002.
Perhaps better than anything that can be written about Doug's illustrious career, Doug's own words convey the mettle of the man,
"I never coached for money," Woog said. "I'm pretty lucky. Not a lot of people get the opportunity to stay in the same community, the same state, within a mile for over 30 years. Every morning you wake up, you're not thinking about going to a job. The game of hockey was never a job for me and that's a very fun way to live."*
Renaming the arena is an honor Doug is due, but the real tribute with this change is to the City of South St. Paul, which will be honored to have the name of Doug Woog grace our facility.
*Athletics Media Relations Men's Hockey Contact John Romo