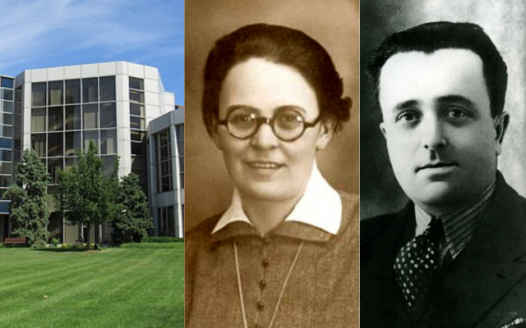 We have formed "The Committee to Rename Pius XII Memorial Library" from
among alumni of Saint Louis University. Members of the committee have
been concerned for some time regarding the honoring of Pope Pius XII on
the University's anchor library after revelations of his decisions,
particularly during the Holocaust, as revealed from the Vatican
Archives. Our goal is to request the administration to change the name
and to include our nominees from among the beatified. We do not call
for the removal of the statue of Pope Pius XII.

We have in mind two names we believe whose lives are consistent with the values of
the University, with contemporary Catholic beliefs, and who have already
been beatified. These two martyrs arrive at us from the same milieu and
circumstances in which Pope Pius XII is seen as having failed.
The two martyrs of the faith are not only recognized through the
beatification but are also recognized in Israel, in the Holocaust
Memorial of Yad Vashem as being among those recognized as The Righteous
among the Nations as having risked their own safety to help Jews escape
Nazi incarceration and death resulting in their own deaths and
subsequent martyrdom. Both were murdered hundreds of miles apart on
December 27, 1944. The two names we wish to nominate are…

Sára Salkaházi, (1 May 1899 – Budapest, 27 December 1944), age 45, born as
Schalkház Sarolta Klotild, was a Hungarian Catholic religious sister who
saved the lives of approximately one hundred Jews during World War II.
Denounced and summarily executed by the pro-Nazi Arrow Cross Party. In
1969, her deeds on behalf of Hungarian Jews were recognized by Yad
Vashem as a Righteous Among the Nations after she was nominated by the
daughter of one of the Jewish women she was hiding, who was killed
alongside her. Salkaházi was beatified On 17 September 2006 in a
proclamation by Pope Benedict XVI, read by Cardinal Péter Erdő during a
Mass outside St. Stephen's Basilica in Budapest (Wikipedia.org)

Odoardo Focherini, (6 June 1907 - 27 December 1944), age 37, was an
Italian Roman Catholic journalist. He issued false documents to Jews
during World War II in order for them to escape the Nazi regime but was
arrested. The Nazis then sent him to a concentration camp in Hersbruck
where he later died on 27 December 1944 due to an untreated leg
infection. Yad Vashem later recognized him as a Righteous Among the
Nations in 1969 for his efforts. Focherini's beatification was held on
15 June 2013 in Modena in a proclamation by Pope Francis who had
Cardinal Angelo Amato preside over the celebration on his behalf.
(Wikipedia.org)