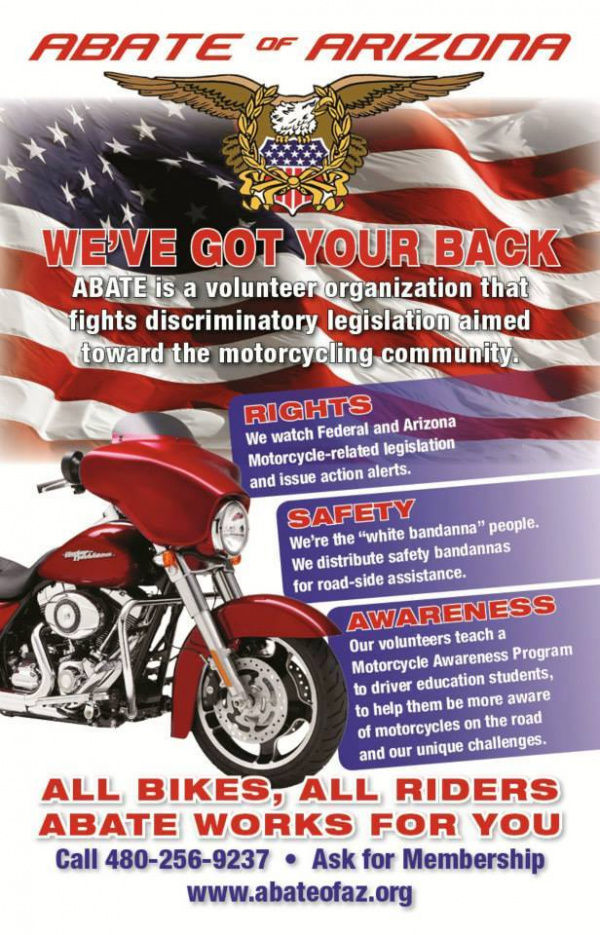 We call on the Arizona State Legislature to pass HM2001 to promote awareness of motorcycle profiling and encourage collaboration and communication with the motorcycle community and law enforcement officials to prevent instances of profiling.

A survey was conducted by the Motorcycle Profiling Project and shows increases in the number of motorcyclists that feel that they are profiled by law enforcement;

Motorcycle profiling means the arbitrary practice of law enforcement using the fact that a person rides a motorcycle or wears motorcycle related apparel as a factor in deciding to stop and question, take enforcement action, arrest, or search a person or vehicle with or without legal basis under the United States Constitution;

There have been complaints surrounding motorcycle profiling cited in all fifteen Arizona counties;

In 2011, Washington signed into law legislation stating that the criminal justice training commission shall ensure that issues related to motorcycle profiling are addressed in basic law enforcement training and offered to in-service law enforcement officers in conjunction with existing training regarding profiling;

The 2011, Washington law has reduced profiling incidents by over 90 percent and the stops that do occur are being dismissed 100 percent of the time; and

In the spring of 2016, Maryland became the second State to pass a law addressing the issue of motorcycle profiling:

We, the below signed, call on the Arizona State House of Representatives to pass HM2001; a nonpartisan resolution encouraging all law enforcement agencies in Arizona to recognize that profiling of motorcyclists exist and that it must be addressed and stopped.