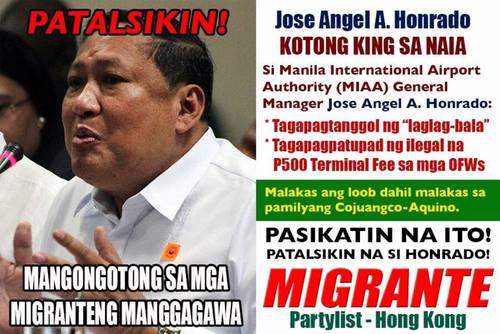 The recent rash of reported cases of travellers being victimized by the “laglag bala” or “tanim bala” extortion syndicate operating within the Ninoy Aquino International Airport has put the Philippines in the worst possible light. What’s worse is that the Manila International Airport Authority (MIAA) General Manager Jose Angel Honrado has not only ignored a public outcry for an investigation, he has even defended the prosecution of the hapless travellers. This is despite overwhelming evidence that the bullets supposedly found in the baggage of the victims, including a 56-year-old domestic worker who was on her way back to Hong Kong, had been planted to squeeze money from them.

But our demand for Honrado's ouster is not merely due to his inaction toward this shameless extortion racket, it is also based on on outstanding questions regarding his competence and integrity. Since he took over as MIAA chief in July 2010, the country's airport system has been plagued by poor maintenance of facilities, congested runways , rampant pilfering of baggage and lack of surveillance equipment, which have all contributed to NAIA gaining notoriety as the world's worst airport for three consecutive years.

Honrado is also to blame for the widely criticized integration of the airport terminal fee in air tickets, which has resulted in the illegal collection of the P550 fee from each departing overseas Filpino worker. MIAA’s Memorandum Circular 8, series of 2014, is a clear violation of Section 35 of Republic Act 8042 or the Migrant Workers and Overseas Filipinos Act of 1995, which exempts OFWs from paying travel tax, airport and terminal fees. But despite a unanimous Senate resolution calling on him to halt the collection, as well as the staunch opposition by all concerned sectors including OFW groups, legislators, and even executive offices such as the Department of Labor and Employment and the Department of Foreign Affairs, Honrado continues to commit this illegal act.

Honrado is a retired air force general whose best claim to fame is his having headed the Presidential Security Group during the term of the late President Cory Aquino. He has no experience managing a civilian office, much less an organization as complex as the MIAA, and it shows. Since taking over MIAA, he has committed blunder after blunder, and persists to commit acts that run counter to the public’s interest.

We call on President Benigno S. Aquino IIII to immediately relieve Honrado as MIAA chief for all the following reasons: his incompetence, mismanagement, refusal to abide by lawful orders and wilful disregard of the country’s laws.