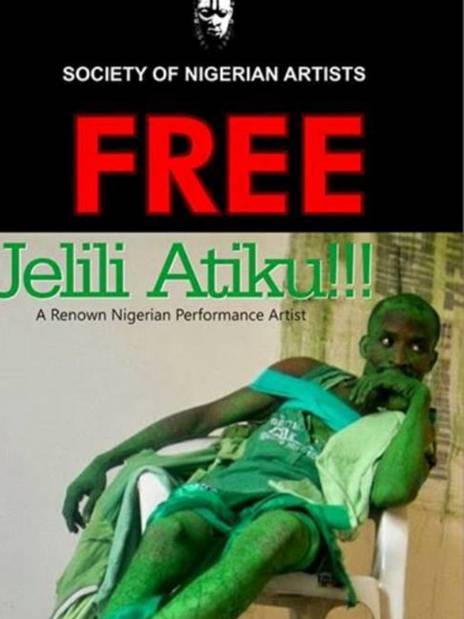 Jelili Atiku, a Nigerian citizen from Ejigbo community in Lagos and a prominent member of the Lagos art community was unlawfully arrested on Monday the 18th day of January 2016 by the police. He was hurriedly arraigned and subsequently remanded in Kirikiri Maximum Prison for 3 days until released on bail on Wednesday 20th January 2016.

Jelili was accused of conspiring with 4 other persons to commit felony to wit public disturbance with his performance on the 14th day of January 2016 at about 5.40pm along Ifoshi Road, Ejigbo in Lagos.

This unlawful arrest by the Nigerian police and subsequent detention does not only demonstrate flagrant abuse of the artist’s fundamental human right enshrined in the Nigerian constitution, the Universal Declaration of Human Rights, the Banjul Charter on Human and People's Rights, the Belgrade Recommendations on the Rights and Status of the Artist, The UNESCO Convention on the Protection and Promotion of the Diversity of Cultural Expressions, all of which Nigeria is a party to, it also shows the level of impunity with which some powerful individuals, who are hostile to artists, use the police and magistrate courts to oppress creative individuals exercising their freedom of expression through artistic creations.

Jelili is an imaginative performance artist whose provocative spectacles use striking attire, unsettling body language and unusual props to open up dialogue and influence popular attitudes. He drops himself right into the heart of Lagos, into the realities of the streets, of densely populated areas and entices people to interact and respond to his visual presentations.Rooted in Yoruba performance traditions, Atiku brings local elements to international performance practice, creating an extraordinary mix of action, symbolism, storytelling, disguise, costume, colour coding and theatricality. A rigorous researcher, his subjects include commentary on Nigerian human rights in the Assassination of a Political Prisoner; politically charged critiques of the ruling class and Boko Haram; site-specific interventions on climate change, e-waste and fuel subsidies; and Araferaku (loosely translated as A Part of Me is Missing), a moving personal eulogy to his father.

In December 2015, Jelili received the Prince Claus Award, a prestigious global award recognizing accomplishments in arts and culture, held in Amsterdam (The Netherlands) for creating a new artistic language combining Yoruba traditional art forms with international performance practice; for his thought-provoking performances that challenge assumptions and stimulate dialogue in an unconventional and dynamic form of community education; for taking personal and artistic risks in order to open new possibilities and reach wider audiences; and for his pioneering dedication to establishing space for contemporary performance art in Nigeria.

It was in continuation of these aspirations that he presented his latest work Aragamago oo on Thursday 14th January 2016 in Ejigbo community area of Lagos. It is disheartening to note that, rather than celebrate this artist who has brought honour to Lagos State and Nigeria, some individuals are using the police and courts to maliciously prosecute him.

In the light of the above, CORA/Arterial Network Nigeria, Country Representative of Arterial Network, a pan African network of artists, activists and other institutions active in the African creative sector, and the Society of Nigerian Artists (SNA), hereby declare the arrest, arraignment and the ongoing trial of Jelili Atiku as a malicious prosecution of an innocent citizen, a clear disregard for human rights, freedom and extreme hostility to artistic expression

1. To intervene and drop the 4-count criminal charge with the Charge No MM/E/01/16 instituted against JELILI ATIKU

2. To bring to justice those enemies of creativity and freedom of artistic expression using the police and courts as tools of oppression of an innocent citizen