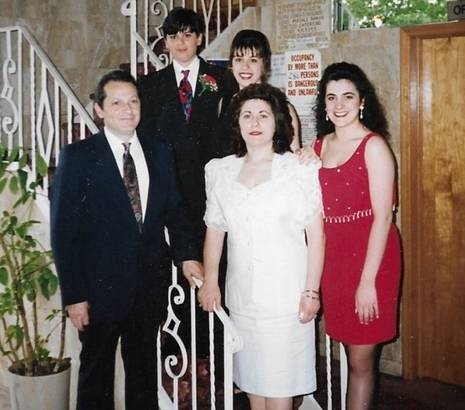 2218 people have signed this petition. Add your name now!

To be submitted to: New York State Board of Parole on behalf of Cathy Vaccarello, Maria Vaccarello, Concetta Vaccarello, and their family. We, the undersigned, oppose the early release/parole for Abraham Myers, a convicted felon (DIN # 95A0907). Anything less than the maximum sentence (LIFE in prison) is unacceptable.

On May 1, 1994, while crossing the street after leaving a family celebration, 3 lives were tragically taken. Abraham Myers with a blood alcohol content of .23 percent, going 70 mph in a 40 mph zone, without headlights on, ran a red light, and struck members of the Vaccarello family - John (50), Cathy (45), Maria (18), and Concetta (17). Witnesses told the police the impact sounded like an explosion. Cathy and Maria were carried and dragged by the car for approximately 200 feet and died at the scene. John and Concetta were thrown 60 feet across the divider into the opposing lane. Concetta died a few hours later at Jamaica Hospital with head injuries. John was critically injured and not expected to survive.

Abraham Myers had 26 license suspensions, was driving without a valid license for 27 years, and had 3 prior arrests for drunk driving. Court records show that Mr. Meyers was first arrested for driving while intoxicated in Brooklyn in 1964. He was later arrested for the same offense and for resisting arrest in 1972 in Crown Heights. Another arrest for driving while intoxicated occurred in 1978 in Far Rockaway, when he was also charged with assault, promoting gambling, driving without a valid license and reckless driving.

Abraham Myers was also arrested at least five other times on charges including assault, drug possession and promoting gambling. In April 1971, he was arrested for grand larceny and pleaded guilty to a lesser charge of attempted robbery.

If the best predictor of future behavior is past behavior, we have no doubt that if released, Abraham Myers will continue in the same manner.

Myers was sentenced to 15 years up to Life Imprisonment. 15 years in prison, 5 years per life, is not justice.

Putting Mr. Myers back on the street puts the public at risk as he no doubt will continue his reckless behavior. His record speaks for itself. A man who chose to disobey the law for 27 years without remorse is not a man who can be rehabilitated. The only reasons his actions have stopped is because he has been incarcerated for murdering three people.