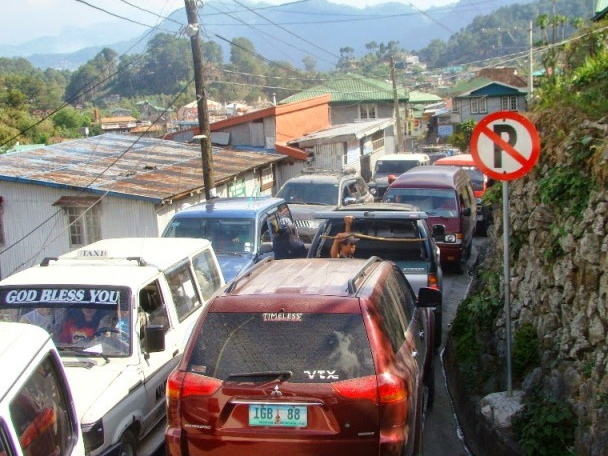 WHEREAS, by virtue of the Revised Tourism Code of 2007, environmental fees are collected from tourists entering the municipality of Sagada having reached 65,000 in 2014 and increasing this year.

WHEREAS, heavy traffic is a major issue especially during influx of tourists during peak seasons and every weekend who visit Sagada with their private vehicles and vans which, because of their parking along the national road from the bus terminal to the road near Sumaguing Cave along with local vehicles cause traffic jams.

"The success of the Sagada Holy Week traffic operations plan has become an outline for the traffic implementation plan to be enforced during long weekends, October 31-November 2,December 22- January 2, other peak of tourist arrivals and every weekend thereafter."

WHEREAS, the deployment of traffic aides significantly figured in the successful Holy Week traffic Operation plan in 2014 and 2015 which led to the smooth flow of traffic in town especially along the gridlock at Dao-angan section of the Dantay-Sagada Road and directing vehicles to designated parking spaces.

WHEREAS, it was noted thereafter that non-deployment of traffic aides lead to the parking of vehicles along Dao-angan and other sections of the national road within the Poblacion area causing heavy traffic flow while posing threats of the commission of accidents.

WHEREAS, despite the Executive Order, there are no regular traffic aides hired to man the traffic along the gridlocks from the bus terminal to Daoangan to the Sumaguing area and direct vehicles to designated parking spaces.

WHEREAS, PREMISES CONSIDERED it is requested from the local government unit of Sagada to allocate a certain amount from environmental fees to be budgeted for wages of traffic aides specially hired every weekend and every day thereof for the purpose called for to this effect; and to cause the opening of employment positions for traffic aides thereof.

RESOLVED FURTHER to forward this petition to the Sangguniang Bayan and to the Office of the Mayor for their appropriate action.