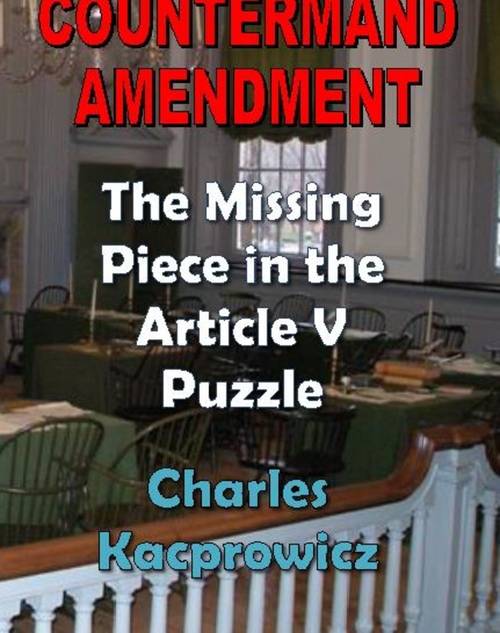 Petition in Support of The Citizen Initiatives Countermand Amendment

1. When 34 State Legislatures complete a similar “Application”, Congress is obligated to convene the called for Convention. This Citizen petition also directs the State Legislature to approve the Delegate Resolution for the “Countermand Amendment Convention”.

2. The Delegate Resolution defines the duties and obligations of the delegates the Legislature sends to the Convention. The delegates are Ambassadors representing their State Legislature at the Convention. They are not free Agents. The Delegate Resolution incorporates the text for the proposed Amendment. Encroachment by the Federal Government has been prohibiting the States from exercising States Rights under the Tenth Amendment. The “Countermand Amendment” will restore State Legislative Sovereignty by:

1. Restoring and protecting the Sovereignty of the United States Constitution.

2. Restoring and protecting the State Legislature and State Constitution by prohibiting the encroachment of these rights by the Federal Government through Countermand Rights:

a. Countermand Rights disallow laws that are onerous to the States (current and retroactive) when 60% of the States concur.

b. Countermand Rights will force Congress, the Courts and Executive Branch to first consider the interest of the States before passing onerous laws on the States.

3. Providing Enforcement Powers under State Laws when the Federal Government refuses to prosecute violators of the provisions of this Article.

4. Assure that the Federal Government does not violate Citizens’ rights to be secure in their persons when the Government uses electronic or other methods of surveillance.

You can print and mail this petition, if you like to:

For printable petitions to share, have signed and mail in can be found here also.

Our State Legislatures need the power of The Countermand NOW!

2. Court decisions ~ STOP LEGISLATING FROM THE BENCH!! STATES HAVE RIGHTS!!

3. Budgets & Debt ~ Good bye unfunded liabilities thrust upon The States and The People while wickedly advancing the financial enslavement of our kids.

4. Obamacare ~ Who doesn’t want this gone?

These are the 3 necessary documents below, including step by step instructions for State Legislators

3) DELEGATE RESOLUTION COUNTERMAND AMENDMENT
Delegates are Ambassadors of their State Legislatures, they are not free agents! To assure a safe, quick and successful Convention it is necessary that all Calling States have the same instructions to their delegates to the Convention. This will prevent possible violations of Article I, Section 10 prohibiting Interstate Agreements without the consent of Congress. The Governor has no Article V authority and does not have to sign this Resolution.For a PDF copy of the Delegate Resolution click this link:http://citizeninitiatives.org/amendment_countermands/delegate_resolution_countermand_amendment.pdf

COMPARISON TABLE OF THE COUNTERMAND AMENDMENT VS. OTHER ARTICLE V GROUPS: http://citizeninitiatives.org/Media/Comparison-Table.pdf

WHY THE COUNTERMAND AMENDMENT: http://citizeninitiatives.org/Legislators/Why_CA_2.pdf

The Countermand Amendment will empower the States to Countermand and rescind any Federal law or regulation that violates States Rights or personal liberties. When 60% of the States agree on a specific Countermand the law or ruling is automatically rescinded. The Federal government can rewrite the law in a way more amenable to the States or abandon it. The States now become respected partners in government, not subjects to Federal mandates.

With the Countermand Amendment States retain their sovereign deliberative authority. WE THE PEOPLE will be able to petition legislators to seek relief from specific encroachments by the Federal government.

Intentional violators of the Amendment can be prosecuted under Federal or State laws.

Visit us at www.countermands.us and volunteer to join the team!

Why waste anymore time or money in Federal Courts with no guaranty of a favorable outcome when 30 States can simply Countermand the issue? If each lawsuit costs each State at least a million dollars just think how we could save The States right here alone!! We can free up our State resources again and use them to help The States and the people prosper again! Just imagine! SUPPORT THE COUNTERMAND AMENDMENT TODAY!!!

Visit www.countermands.us to learn how YOU can help rescue Liberty for America!

An Excellent Letter To State Legislators