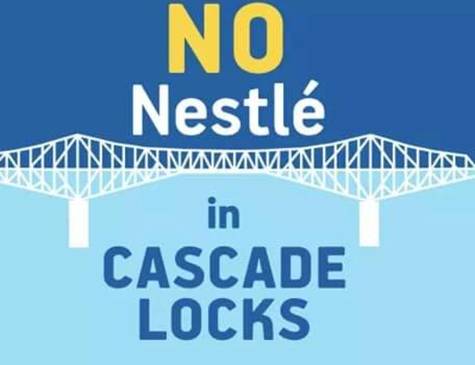 Nestle Bottled Water Corporation has plans with the City of Cascade locks to Build a 50 million Dollar Bottled Water plant. The Plan is dependent upon the approval of a permanent Transfer of Water Rights Application, filed jointly by the Oregon Department of Fish and Wildlife and the City of Cascade Locks, with the Oregon Water Resources Department. ODFW would “trade” public water, Oxbow Spring Water, for Cascade Locks Well-Water. The City would then sell the spring water to Nestle for private commercial use. The Transfer “deal” requires NO Tribal or Public interest Review for approval. The Oxbow Fish hatchery would then use Well-Water for hatchery Operations. One-hundred and eighteen million gallons of water a year, will NOT flow into the Columbia River, IF the Transfer is approved.

The Confederated Tribes of Warm Springs wrote a letter to Governor Kate Brown, on May 12, 2015, in opposition to this Transfer, expressing serious concerns about the health of Salmon habitat, Treaty Rights, Climate Change and widespread drought. The Tribe states, “Moreover, 1ODFW has developed the transfer proposal without observing Senate Bill 777 (ORS.162-.168) and appropriate coordination and consultation with the Tribe.” And “Water quantity and quality and hatchery operations are of paramount importance to ongoing treaty-based rights of the Tribes and to ongoing federal litigation about the operation of the federal hydropower system”

The area at stake has specific Sensitive Cultural Significance to the spiritual Longhouse practices of the Columbia River Tribes. The selling of water goes against the oldest of traditional beliefs which the People still hold as a traditional value. The Selling of this specific Spring Water is an intrinsic desecration and therefor, in conflict with the American Indian Freedom of Religion Act, Public law No. 95-341, 92 Stat. 469 (Aug. 11, 1978) Water is sacred.

We, the undersigned are Tribal Members of the Four Columbia River Tribes and the Fishing People for the Tribes, or enrolled Tribal Members of other Federally Recognized Tribes. We urge Honorable Governor Brown and the Oregon Water Resource Department to, withdraw the current Water Rights Transfer applications between ODFW and the City of Cascade Locks; and reject any future applications, or enter into any buisness proposals, which would lead to the pivatization and commercialization of Oxbow Srping Water. To oppose the Nestles’corporations' plan to build a Bottling Water Plant in the Gorge, at Cascade Locks. We urge Governor Brown to recognize that selling of water at this specific site violates the American Indian Religious Freedom Act (Public Law-95-341, 42 U.SC.), a federal law.

We insist that our Governor Brown and all parties invovled to Re-read the letter of May 12, 2015 from the Confederated Tribes of Warm Springs; and consider the serious concerns about, Salmon Habitat, Treaty Rights and Climate Change; and, the relativity to enviormental perils; and to oppose Nestles’ business proposal based on Respect and Honor of the Treaty of 1855, which Warm Springs, Yakama, Umatilla and Nez Pierce Tribes entered into with the United States Government. Citizens and Tribal members are expected to obey Laws, we expect the same from our Governments.