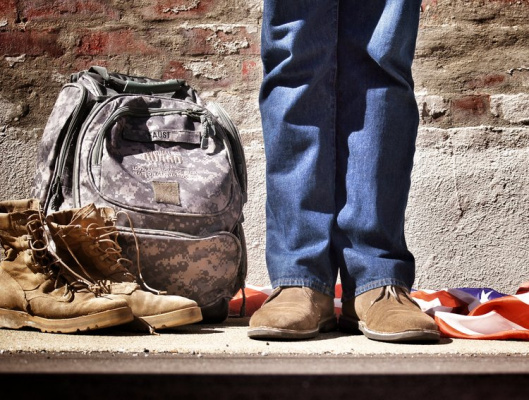 This online petition seeks support from current members of the National Communication Association for a newly-proposed "Communication and Military" division. The rationale for the division is described below, along with contact information for members of the planning committee. If you are a current NCA member, we encourage you to sign in support.

Rationale for the Proposed Division

Communication scholarship about the military has a long history, but since 9/11 work has proliferated across the discipline. For example, Erin Sahlstein Parcell and Lynn Webb’s volume, A communication perspective on the military: Interactions, messages, and discourses(2015, Peter Lang), includes family communication, media studies, and rhetoric scholars. An online search of the 2018 NCA program using the term “military” found that papers on military-related topics were presented in the Applied Communication, Argumentation and Forensics, Feminist and Women’s Studies, Health Communication, and International & Intercultural Communication divisions and were the focus of a Research in Progress roundtable. A second search using “veteran” revealed a number of distinct papers including work in the Activism and Social Justice, Critical and Cultural Studies, Organizational Communication, and Performance Studies divisions as well as the Community College section. Papers took up a host of topics including the militarization of women’s reproductive bodies, uncertainty management by military spouses, veteran and civilian perceptions of PTSD, readings of war films, local to global implications of the military industrial complex, debates about kneeling during the National Anthem, propaganda in war news coverage, student veterans’ assimilation into university campuses, and teaching difficult topics in the military classroom. Communication scholars are engaged an array of analyses and critiques of the military, ranging from the lived experiences of military-connected individuals to the impacts of the military and militarization on larger societies.

The growth of communication scholarship/creative endeavor about the military is important; however, NCA members working on military-connected projects in one area (e.g., rhetoric) often have no idea that members in other areas (e.g., critical/cultural or family communication) are conducting relevant work as well. This dispersion inhibits collaborative efforts to promote scholarship, pedagogy, and community-engaged work on military/veteran-focused topics that can connect NCA members with diverse theoretical and methodological commitments. Although NCA members hold wide-ranging views about the military as an institution, many of us teach in areas/institutions impacted by the military and many of our students are veterans.[1]

Hence, the mission of the proposed Communication and Military Division is to promote scholarly, pedagogical, community-engaged, and social justice driven work that highlights and critiques communication, messages, and discourses within and about the military. The primary purpose is to bring NCA members working in this area together to identify important issues, share knowledge, enhance understanding, critique policies/practices, and contribute to positive social/cultural changes concerning military/veteran-related topics. Topics include (but are not limited to): media framings of military-connected experiences (e.g., women completing special forces training); policy debates about military-related services/benefits (e.g., LGBTQ+ discharge status justice); the role of family during military transitions; critical analyses of war rhetoric; examination of the military as a colonizing institution throughout time; health communication and self-advocacy in the Veterans Affairs Health system; narratives by veterans living with Gulf War illness; and organizing practices that empower student veterans. The division welcomes work from all epistemological, theoretical, and methodological perspectives that addresses these aims. Collectively, we do not take a “for” or “against” stance on the military as an institution. Rather, divisions members recognize the macro and micro implications the military has on culture, society, and our dialogic lives and are committed to fostering a space that actualizes our own and NCA’s commitment to diversity, equity, and inclusion through theory and praxis.

Distinctiveness of the Proposed Division

The proposed “Communication and Military” division is distinct from existing NCA interest groups. No existing NCA division takes the military as its primary focus even though our discipline, with its emphasis on how communication constitutes social entities and realities, is well positioned to offer unique insights and critiques. The proposed division shares some overlap with the Peace and Conflict Communication division; however, many topics central to Peace and Conflict Communication (e.g., mediation, dispute system design) are not focused on the military and many topics central to the newly proposed division (e.g., military spouses’ career discourses, policy debates about transgendered service members) are not addressed by the Peace and Conflict division. Military-connected individuals also encompass the plethora of (in)visible identity standpoints, positioning the military as an opportune site for exploring intersections of race, class, gender, sexual orientation, ability, etc. Given the strong presence of the military in most societies, the proposed division highlights a vital focus for communication studies.

Impact of the Proposed Division on NCA and Existing Interest Groups

The proposed Communication and Military division will offer several benefits to NCA and its members. First, the new division will enhance the quality and rigor of communication scholarship about the military by creating regular opportunities (e.g., panels, pre-conferences) for dialogue and collaboration between scholars who embrace diverse meta-theoretical and methodological perspectives. Second, the new division will strengthen opportunities for NCA members to engage in public programs (e.g., best practices for facilitating classroom or public dialogue about challenging military-related topics) as well as to participate in policy discussions in ways consistent with NCA’s mission. The American Psychological Association (including its Division 19: Society for Military Psychology) offers one model via its evidence-based commentary on policies such as the ban on transgender people serving in the military (https://www.apa.org/news/press/releases/2017/07/transgender-military). Third, the division will highlight opportunities for extramural funding (e.g., the NEH’s “Dialogues on the Experience of War” program, see https://www.neh.gov/grants/education/dialogues-the-experience-war) for which Communication scholars are well-qualified but underrepresented.

We recognize many members are concerned about the proliferation of NCA interest groups. We do not think the answer is to freeze the existing structure of NCA in perpetuity. Each proposal for a new division should be vetted carefully in terms of need and impact while NCA explores options for restructuring or cross-pollinating divisions. In any case, the proposed Communication and Military division should not have a major impact on existing NCA interest groups. We anticipate that NCA members will “add” membership in the new division to their existing affiliations rather than leave other divisions defined by theories or contexts (e.g., critical and cultural studies, international and intercultural communication). Other NCA divisions with a topical focus (e.g., Communication and Sport) are distinct enough that they should not be impacted by the new division. Existing divisions also may be enhanced by members jointly exploring topics (e.g., the use of sport to support veterans who are contending with transitionary challenges). Other scholarly associations (e.g., the American Psychological Association) have longstanding military-focused divisions that have not detracted from other divisions in those associations. In sum, the need for a new division that analyzes and critiques communication within and about the military could not be greater. The proposed Communication and Military division should have many positive impacts for NCA and its members.

[2] Photo by Benjamin Faust on Unsplash

Proposal for a New NCA Communication and Military Division (Submitted by)