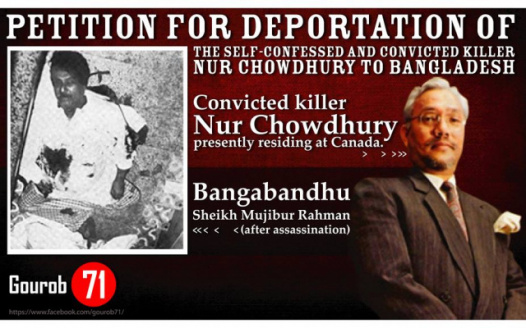 Petition for deportation of the self-confessed and convicted killer, Nur Chowdhury, to Bangladesh

10900 people have signed this petition. Add your name now!

Minister of Immigration, Refugees and Citizenship

Minister of Justice and Attorney General of Canada

Speaker of the Senate of Canada

Speaker of the House of Commons of Canada

iPetition for the deportation of killer Nur Chowdhury

We the people of Bangladesh and Bangladesh diaspora living in Canada and other parts of the world would like to draw attention of the present Government of Canada to a critical fact needs to be addressed for upholding the rule of laws and justice.

Bangladesh become independent in 1971 through nine-month long bloody war under the great leadership of the Father of the Nation Bangabandhu Sheikh Mujibur Rahman. Bangladesh gratefully remembers the contribution of the former Prime Minister Pierre E. Trudeau for his support to Bangladesh during the liberation War in 1971.

The Dhaka District and Sessions Judge Court found Nur Chowdhury guilty of the offense of killing the Father of the Nation and his family members on the night of 15 August 1975 and sentenced him with death penalty in November 1998, subsequently, the High Court upheld his death penalty. The judicial process followed regarding Nur Chowdhury were complete, transparent and impartial, the Amnesty International (AI) Research Center in London which found no indication of bias or unfairness in the trails.

It is a matter of grief and surprise that the self-confessed killer Nur Chowdhury is now living in Canada evading justice and enjoying with full impunity from his punishment.

Federal Court of Canada of declined to grant refugee status to Nur Chowdhury. The Federal Court agreed with the proposition that Nur Chowdhury has committed first degree murder, living in Canada he is fugitive from the justice, and evading prosecution not persecution. Decision on Nur Chowdhury’s deportation to Bangladesh is pending to the Minister of Citizenship and Immigration of Canada for nearly a decade, which is unprecedented. Despite innumerable requests from the highest political levels of Bangladesh, the Canadian government is not deporting killer Nur Chowdhury to Bangladesh on sake of upholding the Canadian Charter of Rights and Freedoms (Constitution Act-1982).

We appreciate that Canada has abolished capital punishment i.e. death penalty in 1976. But Bangladesh and other neighbouring countries in South Asia still follow the British legal system, where person can receive capital punishment for homicide and crimes against humanity.

As an exceptional circumstance, Canadian government allowed extradition of convicted criminal to a country where he/she may face the death penalty i.e. in 2009. Deportation of Nur Chowdhury is an ‘exceptional circumstance’, he killed the Father of the Nation and innocent family members including 10 years old child and a pregnant woman. Nur Chowdhury has committed the crime against humanity, which is no doubt an ‘exceptional case’.

Mr Robert Currie, Professor of Law of the Dalhousie University said that “Nur is a murderer ……………… therefore he should not be granted any humanitarian ground to stay in Canada………………”

Nur Chowdhury has committed crime against humanity, people of Bangladesh are still carrying the grave wound of the slayer’s impunity from justice. Most importantly, two daughters i.e. Hon’ble Prime Minister Sheikh Hasina and her only sister Sheikh Rehana both have the right to seek justice for the gruesome murder of their parents and family members.

We believe that Canada’s commitment to the rule of law and human rights would play an instrumental role to deport this criminal who had a well-documented role in acts of terrorism, assassination and crime against humanity.

We the people of Bangladesh and Bangladesh diaspora living in Canada and other parts of the world appeal to the Government of Canada to deport Nur Chowdhury to Bangladesh immediately, to ensure justice. Canada should not be the safe-haven for a perpetrator like Nur Chowdhury, who committed crimes against humanity and a convicted killer of the Father of the Nation of Bangladesh.