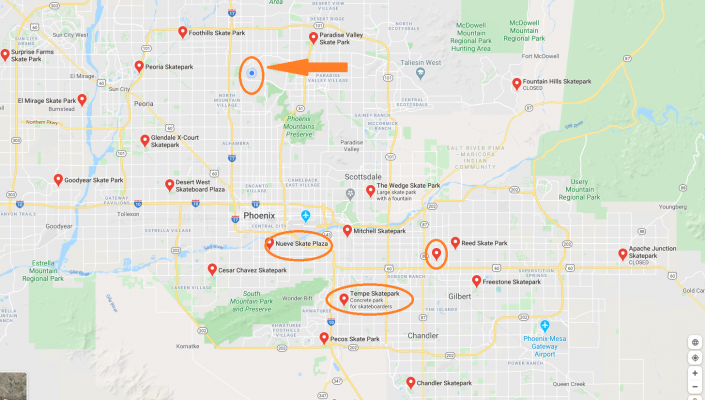 It has become a SAFETY issue. Our children need a safe and sanctioned area to ride their skateboards and scooters.

Where in Moon Valley?

The north side of the Moon Valley Park is at least 164,711 square feet and has a soccer field (which requires an average of 80,000 square feet), as well as some recreational space. A skate park/plaza designed to meet all skill levels will only take 18,000-25,000 square feet so it appears there is more than adequate space to build a skate plaza that will not prohibit current usage.

Why a Skate Plaza?

Phoenix currently has 17 Skate Parks and only 3 Skate Plazas. Skate Plazas (circled in orange on map, plus proposed area w/orange arrow) include scooter riders. Skate Parks prohibit scooters (https://www.phoenix.gov/parks/parks/skate-parks). A Plaza will serve a larger group of children in our area. The closest Skate Plaza to Moon Valley or North Phoenix residents is approximately 19 miles.