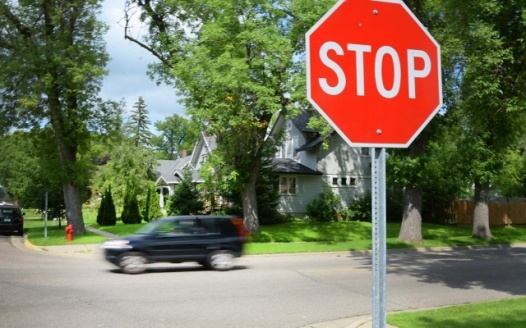 Increased traffic in both directions on San Fernando Mission Blvd (SFM) between Reseda Blvd and Zelzah Avenue has resulted in a hazard for drivers turning onto SFM from either the North or South from Etiwanda Avenue.

A combination of a rise in the road from the Westerly direction on SFM and street parking causes an obscured view for drivers traveling North on Etiwanda Ave and trying to turn onto SFM. A similar situation occurs from the East for drivers traveling South on Etiwanda due to the combination of a bend on SFM and street parking obscuring oncoming traffic on SFM.

These conditions are also a hazard for pedestrians attempting to cross SFM. The speed of traffic and the frequent failure of cars to give way to those on foot is particularly dangerous. With Darby Elementary School two blocks South of the intersection and Temple Ahavat Shalom to the North on Chimineas Ave., children and worshippers are at risk trying to cross the street.

It is for the safety of both vehicle drivers and pedestrians that the undersigned petition for the installation of a Four Way Stop sign.