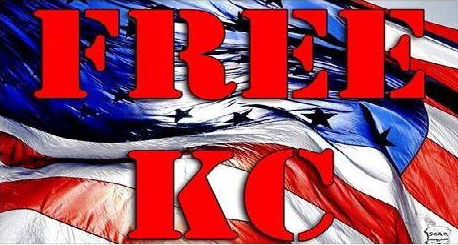 IN DEFENSE OF TEXAS PATRIOT KC MASSEY!! PLEASE SIGN AND SHARE this petititon like
'The Brushfires of Liberty'!!
Remember Ben Franklin said.....
~HANG TOGETHER OR HANG SEPARATELY ~

AMERICA WAS FOUNDED BY TOUGH HELL-RAISERS Rugged citizens who evaded taxes, spoke strongly against tyranny, grew tobacco, brewed beer and spirits and smuggled weapons. And it will be saved
BY THOSE SAME TYPES OF CITIZENS!!

Texas owes KC a debt of gratitude for his effort and success in turning hundreds upon hundreds of illegals back across the river and keeping the trespassers from wreaking any further damage on the landowners property. Some report a substantial percentage drop in the crime rate of Brownsville, KC when Camp Lone Star was in operation. I wonder how much money KC saved the State of Texas or how many criminals never got the chance to commit the crimes they intended. After all we had an off duty Border Patrolman ambushed and murdered in a fishing trip 80 miles north of the border. Had our southern border been secure that family would still be happy.
Texas Patriot and Border Defender KC Massey deserves EXECUTIVE CLEMENCY or AMNESTY IF YOU WILL. Do NOT just feed him to the federal wolves!!
If the federal government rules Texas then why do we need a Texas State Constitution? or a Texas State Legislature for that matter! DO THE FEDS RULE TEXAS.) KC paid his debt to society 26 years ago!! Since that time KC has been a wonderful father, devoted husband to his lovely wife, a profitable and successful business owner, a tax paying landowner, and is a Christian. He is a proud and Brave Texan and a damn Fine American citizen who deserves respect. He is one of the few men who had the nerve to do the right thing and come down here to repel the invasion and defend the border.
This charge has been trumped up and the news media is doing all they can do to try to railroad & villainize him and the other concerned citizens who are trying to do the job that this criminal administration isn't doing. DEFENDING THE BORDER AND LANDOWNERS WHO LIVE THERE. I have a copy of one reporter telling a bold faced lie to my local community on TV, in front of God and everyone, in order to manipulate the public opinion and make concerned citizens out to be some kind of 'domestic terrorists'. HOGWASH! How can ANYONE BE EXPECTED TO STAND FOR IT??
Rustys property is constantly and on a daily basis dealing with CRIMINAL TREPASS and DESTRUCTION of his private property by ILLEGAL INVADERS. THE TRESPASSERS ARE NOT 'ILLEGAL IMMIGRANTS'. They are INVADERS and they are by NO means 'harmless women and children' (less than 30% are women and kids and a large percentage of those are carrying contagious diseases yet still being allowed into the country) the remaining 70% are working age or criminals, drug smugglers, human traffickers, gun runners, the worst of the worst kind of criminals from central America, drug cartels, thieves, murderers, rapists, gangbangers and jihadists.
KC IS NOT THE BAD GUY IN THIS SCENARIO!! Now, I ask you. If the Federal Government and The State Government won't defend our borders then who does that leave to defend America? I will tell you who it leaves. It leaves WE THE PEOPLE!!
KC sacrificed his comfortable lifestyle and spent months on the border turning back HUNDREDS of illegals before they could get to the Border Patrol and onto the federal teet. No telling how much money he saved Texas or how many criminals he stopped from crossing into Texas before they could go North up into the rest of the country to commit crimes against innocent American citizens. KC and the men and women of Camp Lone Star deserve our gratitude NOT AN ELECTRONIC TRACKING DEVICE ON HIS ANKLE AND FEDERAL TYRANNY.
ARREST THE REAL TERRORIST OBAMA. CLEMENCY FOR KC!!

HE SHOULD BE GETTING AN AWARD INSTEAD
OF GETTING HARRASSED!!
Please share this like 'The Brushfires of Liberty'!! Remember.....
HANG TOGETHER OR HANG SEPARATELY.
DEFEND KC MASSEY!!
KDG III% TX USA

Anyone wishing to offer financial assistance to KC and his family please use paypal acct @ Cossackkc@yahoo.com