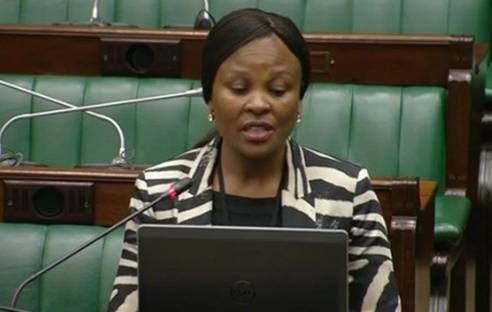 Petition demanding that Public Protector finalizes and releases her report relating to the R26 billion stolen by apartheid era leaders,

Petition demanding that the Public Protector finalizes and releases her report relating to the R26 billion stolen by apartheid era leaders, politicians, bankers and arms dealers that she had been handling since August 2011

In 1997 a private investigations company from the UK (Ciex) was contracted by the government to investigate apartheid era crime and corruption. Subsequently, Ciex indicated (at the end of 1997/beginning of 1998) that billions were stolen by white capital of which R26 billion is recoverable immediately. More specifically the R26 billion was looted by apartheid-era bankers, arms dealers, leaders and senior politicians from the South African Reserve Bank (SARB).

The Reserve Bank loans, as alleged in the Ciex Report, essentially amount to gifts to the numerous shareholders of Bankorp. These included Absa, Sanlam and Rembrandt (the latter being the Rupert family’s investment agency).

Subsequently and in August 2011, the Public Protector Adv. Thuli Madonsela indicated that she would conduct investigations into some of Ciexs claims. To this end she will enquire into the missing apartheid billions including the R26 billion implicated in apartheid-era corruption.

On 7 September 2015 BLF wrote to the Public Protector and requested progress regarding her investigations and to this end when the public can expect her report to be released.

When no response was received from the Office of the Public Protector to BLF's queries of 7 September 2015 we wrote a follow up letter. Still no response or acknowledgement was received. BLF then staged a sit in at the Pretoria office of the PP and on the following day disrupted the PP's keynote address at the Desmond Tutu lecture at UWC and demanded that the OPP delivers on its promise to disclose its investigation report to the public.

Following the first sit in on 30 September 2015 the Deputy Public Protector (Advocate Kevin Malunga) made an announcement on national television (SABC News Programme ‘Question Time’) that they would disclose the information on the investigation regarding the stolen R26Billion early the next morning (1 October 2015). No response was received on the said date. The PP subsequently announced on Twitter that the investigations were "derailed" but is now back on track. Also during the first sit in the Deputy PP lied and said the PP was not in the building when in fact she was there.

On 5 October 2015 the PP sent her response. Her response was empty. Also she offered no apology for her late response neither did she acknowledge BLF's letter sent on the 7th September to her office.

To date the office of the public protector has done nothing about the R26billion looted by apartheid leaders from SARB (which is a small part of the R563billion that the BLF's "Preliminary Report on Apartheid Era Corruption and other Economic Crimes” has revealed as stolen. See link for full report: http://blf.org.za/2015/09/29/black-first-land-firs...

As can be gleaned from above BLF has already demanded that the PP finalizes her report. It is clear that the investigations have already been completed before the matter reached the PP's office. The said investigations have in turn clearly identified the crimes committed and who were responsible for those crimes. The PP must now simply do her report and publicly release it together with her findings so that the process of bringing the perpetrators to justice can be finalized and the stolen R26billion returned. This R26billion will be utilized to impact the lives of the unemployed youth.